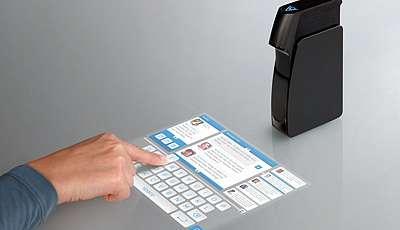 1) Light Touch
The Light Touch from Light Blue Optics is a marvel — it can beam a virtual computer on to any flat surface, allowing users to tap away as though on a proper keyboard. It’s not commercially available — the Cambridge-based company is hoping to license the technology to other manufacturers — but if it does go on sale, it could herald a shift in the way we interact with the world around us.

2) Bloggie
Inexpensive, pocket-sized, web-friendly camcorders are two-a-penny, but Sony’s challenger to the all-conquering Flip has some truly unique and useful features. The Bloggie has a detacahable 360-degree camera that you can pop on top of the device. It means you can hold the camera steady while filming all around you. Load the footage on to a computer, and you can either play it back as a weird, circular movie, or ‘unravel’ the clip in to a strip, so that you view action as you would a conventional video.

3) Que
The Que, a cross between a tablet-style computer and an ebook reader, has been one of the stars of the show. Plastic Logic, the British-based company behind the device, say it is aimed at businessmen rather than consumers, allowing them to view and edit documents, download newspapers, manage their schedule and read ebooks on an entirely shatter-proof gadget. There’s no UK launch date yet, but this sleek, lightweight device will prove popular with mobile workers and an early adopters when it goes on sale.

4) Sony 24in OLED 3D screens
Once again, 3D is big news at the show, with several manufacturers showing off the televisions we’ll be able to buy for our living rooms in the coming months. But one of the most eye-catching 3D sets is Sony’s prototype 24in OLED screen. OLED technology makes colours more vivid and blacks really dark and inky, and the pin-sharp picture is as crisp and vibrant as they come. Sony is coy about when it will start commercially producing larger versions of these OLED screens, but as soon as it does, consumers will snap them up; they make the current crop of LED television look as old-fashioned as a Bakelite.

5) Boxee
Boxee is a fantastic bit of software that can be installed on your computer or Apple TV to ‘beam’ the best web video content to your television. Users can access content from the BBC iPlayer, YouTube and Last.fm. But the people behind Boxee have decided to simplify the process further still by launching a set-top box, so users don’t have to worry about the complicated process of downloading and installing software. The Boxee box is the size of a couple of CDs, and plugs directly in to your televison to stream the best of the web over your home broadband network. The box is available only in the US at the moment, but expect to see it in the UK before the year is out.

6) Lenovo IdeaPad U1
Lenovo’s innovative ‘hybrid’ device is actually two gadgets in one — it works just like a conventional laptop, or you can detach the screen and use it as a tablet-style computer. Lenovo says that the U1 suits the “dynamic lifestyles” of users by cleverly combining the functionality of a notebook with the touch-screen interactivity offered by the tablet. We’re likely to see the U1 on sale in the UK later this year.

7) Parrot AR Drone
Augmented reality — in which real-world images are overlaid with useful data, information or rich content — is set to be one of the big success stories of 2010. Some experts even expect the technology to filter down to the world of video games, and that’s what Parrot’s drone was designed to showcase. The helicopter-style drone, powered by four small blades, floats lazily through the air. On board are two mini video cameras, which send images back to an iPhone, which is running a special app that transforms the device in to a remote control for the chopper, as well as a video game. By tilting the iPhone, players can change the direction of the quadricopter, while images beamed back from the chopper are overlaid with virtual pictures of monsters or aircraft zooming across the screen. Parrot’s drone is purely a proof of concept, but all the experts believe augmented gaming will be commonplace within the next two years.

8) Panasonic 3D TV
CES wouldn’t be CES without an impossibly huge television from Panasonic, and one of the highlights of this year’s show is the Japanese company’s 152in plasma screen 3D TV. It’s made from several plasma displays fused together, and is unlikely to appeal to consumers (unless they have a huge living room), but expect to see it in posh hotels and luxury shopping centres in the coming months.

9) Zyxio Sensawaft
Have you ever wanted to control the cursor on your computer using only your breath? No? That’s a shame, because that’s exactly what the Sensawaft does. By blowing in to a special ‘microphone’, you can control the speed and direction of the cursor across your computer screen. Zyxio, the company behind the technology, says it could be very useful for disabled computer users, and also envisage it being applied to other scenarios, such as controlling a mobile phone, being used as a “third hand” when playing an action-packed video game, or even operating in-car sat-nav. We’ll see the first Sensawaft devices go on sale later this year, costing around £60.

10) Entourage eDGe
With Apple rumoured to be launching its own tablet-style computer later this month, you’d forgive other manufacturers if they sat back to see what Apple did before releasing their own products. But Entourage has decided to lead where many are choosing to follow, unveiling a dual-screen tablet-cum-ereader that shows just how elegant this technology can be. The eDGe features an eInk screen on the left, for reading ebooks, annotating copy and taking notes; on the right is an LCD screen running the Android operating system, that can carry out simple computer tasks such as emailing and web browsing. The device can be opened backwards on itself, so you can hold it in one hand and look at one screen. It will cost $490 when it goes on sale in the US next month, and UK gadget fans will be hoping that a British launch follows soon.