Iran Must End Slide Into Bloodshed 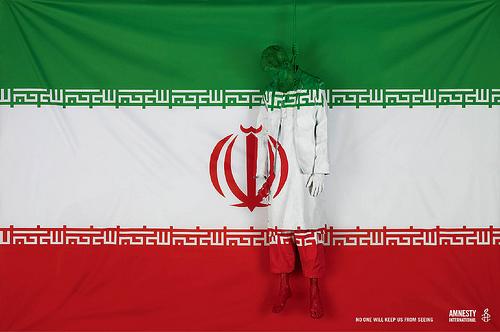 Amnesty International has condemned the “wholly avoidable” deaths of up to 15 people in Iran during the ‘Ashoura religious commemorations.

The organization called on the authorities to ensure that those attending funerals and commemorations in the coming days and weeks are guaranteed the right to assemble peacefully and to express their opposition to the current government.

“The spiral of violence is growing in Iran and the excessive force by the security forces appears to be meeting unprecedented resistance from protestors,” said Hassiba Hadj Sahraoui, Amnesty International Deputy Director for the Middle East and North Africa.

Demonstrations on 27 December were policed by the Basij, a plain-clothed, volunteer paramilitary force under the control of the Revolutionary Guards, and the Special Forces units of the police. In the unrest following June’s presidential elections, Basij personnel used firearms.

“The loss of life during ‘Ashoura was wholly avoidable and this slide to more bloodshed must end now,” said Hassiba Hadj Sahraoui.

Amnesty International has only been able to contact people in central Tehran who spoke of day-long clashes, from Vali Asr Square, College and Hafez Bridges – the latter of which security personnel used to hurl rocks at vehicles below – and Revolution Square (Meydan-e Enghlab) in the day to Mir-Damad street late into the evening as swathes of the city with covered in the smoke from the tear gas.

The funeral of 35 year old Seyed Ali Mousavi, the nephew of former presidential candidate and political leader, Mir Hossein Mousavi, is expected to take place along with others in the coming days.

Iran is bound by international human rights treaties such as the International Covenant on Civil and Political Rights that guarantee the right of peaceful assembly and expression.

“Despite Amnesty International’s and others’ advance appeals, in far too many places the authorities singularly failed to respect the rights of those Iranians taking part in ‘Ashoura commemorations to peacefully assemble and to express themselves, even in opposition to the government. We deplore the increased levels of violence and renewed killing on ‘Ashoura that was wholly avoidable.”

“The Supreme Leader and government must instruct the police to end the use of force while leaders of the Revolutionary Guard must withdraw the Basij from demonstrations since time and time again it has been shown that their actions are fuelling conflict, leading to the loss of life.”

“Inquiries announced by the authorities so far have been confusing and opaque and are simply not believed by most Iranians,” Hassiba Hadj Sahraoui said.

Amnesty International also expressed concern at reports of arrests that are said to have taken place on 28 December. Reports indicate that political leader had once again been detained along with three advisors to Mir Hossein Mousavi and Ayatollah Mousavi Tabrizi, a religious leader.

Human rights activist was detained at 06:45 in the morning, reportedly by four plain-clothed and armed men who are said to have forcibly entered Baghi’s residence. A Dubai TV correspondent, a Syrian national, appeared to be unaccounted for in the course of 27 December.

Amnesty International considers Emadeddin Baghi and Ebrahim Yazdi to be prisoners of conscience.

Background
The unrest on ‘Ashoura was the worst since the days following the June 2009 presidential election. As then, the mobile phone networks and internet services appeared largely disabled.

‘Ashoura, the 10th day of the Islamic month of Moharram, is a Shi’a Muslim religious occasion marking the killing, or martyrdom, of Hossein, the grandson of the Prophet Mohammad and an important religious and community leader.

By around 21:00 GMT on 27 December the Acting Head of the Law Enforcement Forces (LEF) for Greater Tehran, Ahmad Reza Radan had admitted to four deaths in Tehran, adding that there were 300 hundred arrests.

One person was said to have fallen off a bridge; two in car accidents and only one man – whose identity was not revealed – was said to have been shot. It is widely believed that this was a reference to Mir Hossein Mousavi’s nephew.

Commander Ahmad Reza Radan of the Iranian police called the shooting suspicious since the police were not equipped with guns. During the unrest in June and July 2009, it appeared that only the Basij militia and members of the Revolutionary Guards were armed.

The authorities have claimed that some of those arrested belonged the illegal People’s Mojahedin Organization of Iran (PMOI), banned since the early 1980s.

The Jonbesh-e Rah-e Sabz (JARAS) news outlet issued five names of individuals who were said to have been killed on ‘Ashoura: Mehdi Farhadinia, Mohammad Ali Rasekhinia, Amir Arshadi, Shahram Faraji and Seyed Ali Mousavi, who is said to be the nephew of Mir Hossein Mousavi, one of the presidential candidates in June’s election. Amnesty International has not been able to confirm the names issued.

Confrontation between thousands of mourners marking what is believed by Shi’a Muslims to be the martyrdom of Emam Hossein on the tenth (‘ashoura) day of the month of Moharram and security officials were reported from Tabriz, Babol and Mashhad in the north of Iran; Tehran, Qom, Najaf Abad and Esfahan in the centre and Shiraz in the south.
Make a difference!
» Human Rights Lawyer Le Cong Dinh Charged With Attempting To Overthrow The State (UAA155/09)
» Five Iranian Human Rights Activists Risk of Torture (UAA347/09)
» Georgi Nakani, Male Russian Abducted And In Danger (UAA345/09)