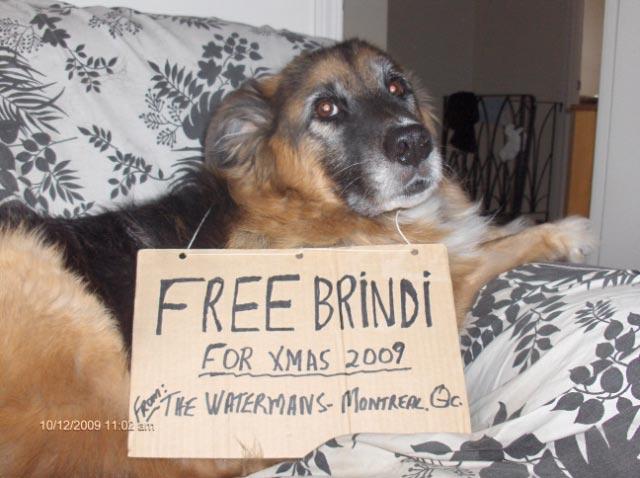 A DAISY CHAIN OF VIGILS

Help bring Brindi home for Christmas and all her holidays to come!

Brindi is a mixed-breed rescue dog in Halifax, Nova Scotia. She was wrongly taken from her home by animal control officers in July 2008. They ordered her to be destroyed due to a few accidental incidents in which no human was attacked and no animal was severely injured. Brindi has been living in a cage at the pound ever since, while her owner fights for her life.

Brindi is a lovable, smart, “highly trainable” dog, with a loving home waiting. Our goal is to make others aware of Brindi’s unfair capture and ridiculously long stay on death row – and most importantly, to ask Halifax to release her now. Brindi’s loyal owner, Francesca Rogier, has struggled too long already. Her dearest wish is to be reunited with her dog for Christmas.

We at DAISY, and any, many people in Nova Scotia and indeed all over the world feel the same as Francesca. That is why, together with a local animal rights group, Humane Halifax, the DAISY Foundation in Calgary is organizing a Canada-wide chain of candle light vigils for her release on December 10. Our action to stand up for Brindi also honors International Animal Rights Day. We shall gather at special locations at dusk and join others across the nation to send a heartfelt plea to the city of Halifax: Please let this dog go home for Christmas!

Why should Halifax let Brindi go home now? Because it’s the right thing to do, any time of year.

To begin with, Brindi has been assessed by an expert, who does not deem her “dangerous” and considers her “highly trainable.” In fact, those caring for her at the pound openly declare they love this dog! Yet Francesca Rogier was forced to go to court to save Brindi from euthanasia. She won a ruling against the by-law last January, but Halifax would not release Brindi, and instead charged Francesca with by-law violations for the first time–at the last hour of the statute of limitations, hoping to get a judge to put her down. We feel that this is no substitute for due process denied her from the start.

One of the simplest ways for the city to release Brindi now is for the city to drop the charges, recognizing that she is not a dangerous dog. While Halifax wants to insure public safety, it has been lenient in the past to dogs who either seriously injured or killed other animals. The provincial attorney general also has the power to stay the charges. And the City Council has the power to amend the by-law, something it already plans to do, not until Brindi’s case is “over.” We feel that as Brindi and Francesca were the only ones to suffer from the new law in this way, they should be the first to benefit from the needed amendments. Knowing changes are on the way, the mayor has the power to issue an administrative order to call for Brindi’s release.

In addition to denying Francesca her right to due process, the city needlessly confined Brindi for an excessive amount of time, at a facility that was not designed for stays of over 30 days. So it’s no surprise her health, which was perfect in July 2008, is declining. She’s already developed gum disease and dental problems – and now, chronic pancreatitis. She’s had two attacks of the disease since September; the second led to hospitalization. A year and a half of stress, lack of sufficient exercise, and a high fat diet are doubtless the cause. Daily exposure to potentially lethal cleaning chemicals is also a concern. She desperately needs exercise and so does Francesca. This woman and her best friend are suffering and need each other.

Justice for All Animals

The DAISY Foundation in Calgary is dedicated to justice for all animal victims of abuse, even those who might be abused due to the actions of local governments. Francesca has shown Halifax she’s taken appropriate measures to comply with the by-law and is committed to special training for Brindi, with the aid of an expert trainer, Ted Efthymiadis. She is willing to drop her suit against Halifax in return for Brindi’s release and all or at least some of the tens of thousands in legal fees she needed to fight for Brindi’s life.

See: “Nine months is nine months too many” http://www.youtube.com/watch?v=u3FO86v7M20

“Stop Brini from Being Euthanized” http://www.youtube.com/watch?v=RqI9BgFnxxw

See: “Nine months is nine months too many” http://www.youtube.com/watch?v=u3FO86v7M20

“Stop Brini from Being Euthanized”  http://www.youtube.com/watch?v=RqI9BgFnxxw