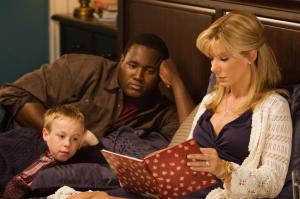 Though The Blind Side still packed a wallop, the movies as a whole saw a typical post-Thanksgiving slide over the weekend. However, due to the momentum from last weekend’s record Thanksgiving gross, overall business was the highest the timeframe has ever seen (although not in terms of attendance), up 21 percent over the same period last year.

As indicated by their close grosses last weekend, The Blind Side out-paced The Twilight Saga: New Moon to claim the top spot. Down 49 percent, the football-themed drama had the best hold among nationwide releases, racking up an estimated $20.4 million. With a super $129.3 million tally in just 17 days, it surpassed Rocky IV to become the highest-grossing sports drama on record (though it ‘s still a far cry off in terms of attendance). Among football movies, only the Adam Sandler comedies The Waterboy and The Longest Yard made more, and Blind Side will soon overtake them as well.

New Moon continued to descend at a steeper rate than the first Twilight, falling 63 percent to an estimated $15.7 million. The vampire romance, though, has long since shot past its predecessor’s final tally, grossing a phenomenal $255.6 million in 17 days. The picture’s even made more than and sold about as many tickets as the last Thanksgiving Harry Potter movie, Goblet of Fire, through the same point.

As expected from the post-Thanksgiving period, the new nationwide releases generated little interest. Brothers led the way with a modest estimated $9.7 million at 2,088 sites. Armored banked a quiet estimated $6.6 million at 1,915 sites , while Everybody’s Fine gathered a disagreeable estimated $4 million at 2,133 sites.

One release, though, stood out. Transylmania captured the record for the lowest-grossing opening for a movie playing at over 1,000 sites. The horror spoof grossed a mere estimated $274,000 at 1,007 sites, stripping the 1991 feature, Rich Girl, of the title.

Despite much media hype, Precious saw the biggest dip among nationwide releases. The drama plummeted 67 percent to an estimated $2.3 million. Combine that with its steep decline over Thanksgiving, and it looks like the picture has lost momentum with audiences. However, its $36.3 million tally in 31 days is strong for a platform release.

In limited release, Up in the Air landed with a flashy estimated $1.2 million at 15 sites, averaging $79,000 per location, which was greater than the debut of Jason Reitman’s previous picture Juno ($413,869 at seven sites). Still, a big launch in limited release doesn’t necessarily portend a bright future, and the picture’s true test will be on Christmas day when it enters nationwide release.

This Timeframe in Past Years: