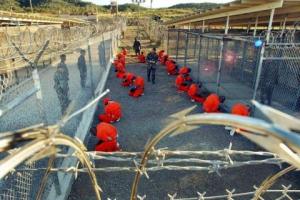 – The Departments of Justice and Defense today announced forum decisions for ten detainees at Guantanamo Bay whose cases were previously charged in military commissions, including five detainees accused of conspiring to commit the Sept. 11, 2001 terror attacks and a detainee accused of orchestrating the attack on the USS Cole.

“Today we announce a step forward in bringing those we believe were responsible for the 9/11 attacks and the attack on the USS Cole to justice,” said Attorney General Eric Holder.  “For over two hundred years, our nation has relied on a faithful adherence to the rule of law to bring criminals to justice and provide accountability to victims.  Once again we will ask our legal system to rise to that challenge, and I am confident it will answer the call with fairness and justice.”

“Bringing terrorists to justice is an integral part of our national security,” said Defense Secretary Robert Gates.  “The reform of Military Commissions and today’s announcement are important steps in that direction.”

The Attorney General, in consultation with the Secretary of Defense, has determined that the United States government will pursue a prosecution in federal court against five detainees who are currently charged in military commissions with conspiring to commit the Sept. 11, 2001 terror attacks, which killed nearly 3,000 individuals.  These detainees are Khalid Sheikh Mohammed, Walid Muhammad Salih Mubarak Bin ‘Attash, Ramzi Binalshibh, Ali Abdul Aziz Ali and Mustafa Ahmed Adam al Hawsawi.

The Department of Justice intends to pursue a prosecution against these five individuals in the Southern District of New York as soon as possible.  Prosecution of these detainees will be co-managed by teams from the Southern District of New York and the Eastern District of Virginia.  These detainees will be transferred to the United States for trial after all legal requirements, including a 45-day notice and report to Congress, are satisfied, and consultations with state and local authorities have been completed.  The detainees will be housed in a federal detention facility in New York, which includes maximum security units that have securely held terrorism suspects in the past.   Once federal charges are brought against these detainees, military commission charges now pending against them will be withdrawn.

The Attorney General has also determined, in consultation with the Secretary of Defense, that the prosecutions of five other Guantanamo Bay detainees who were charged in military commissions may be resumed in that forum.  These detainees include the detainee accused of orchestrating the October 2000 attack on the USS Cole, which killed 17 U.S. sailors and injured dozens of others, and a detainee who is accused of participating in an al-Qaeda plot to blow up oil tankers in the Straits of Hormuz.

The Attorney General and the Secretary of Defense are confident that detainees now held at Guantanamo Bay can be detained securely in U.S. detention facilities and that their trials can be conducted effectively and safely in the United States, whether in federal court or in a military commission.

Over the past decade, the Department of Justice has successfully prosecuted many terrorism defendants in our federal courts.  Today, there are more than 200 inmates who have a history of or nexus to international terrorism, who have been convicted in federal courts, and are now housed securely in Bureau of Prisons facilities.  The Department has already transferred one former Guantanamo Bay detainee, Ahmed Ghailani, to the Southern District of New York to face trial for his alleged role in the 1998 East Africa Embassy bombings.

Finally, the Attorney General and the Secretary of Defense understand and share the concern of the victims of terrorist attacks about the length of time it has taken to bring the perpetrators to justice.  Justice has been delayed far too long.  Prosecutors in both departments are committed to moving forward with all these cases as quickly as possible and to working together to see that justice is served, consistent with our nation’s values.