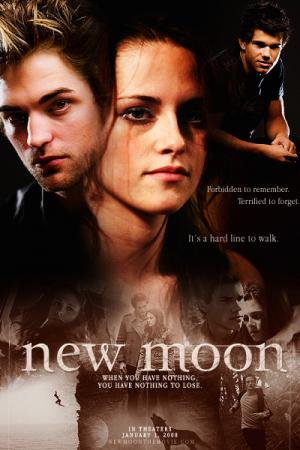 New Moon opens at midnight one week from tonight, but the film has already outsold its predecessor, Twilight, in total advance ticket sales on Fandango, the nation’s leading movie ticketing destination. The new movie currently represents 75% of the site’s ticket sales.

Although thousands of next Thursday night’s midnight showtimes are sold-out across the country (from Anchorage, Alaska to Winter Park, Florida), tickets are still available, while new showtimes are added regularly to keep up with the demand.

“Ever since we started selling advance tickets to New Moon on August 31, the demand has been unstoppable, as the fan base just keeps growing every day,” says Fandango Chief Operating Officer Rick Butler. “New Moon is tracking to be Fandango’s #1 top advance ticket-seller of all time.

The Top 5 Advance Ticket-Sellers on Fandango (as of November 12, 2009) are as follows

According to a recent Fandango survey of more than 2,000 New Moon ticket-buyers, the first Twilight movie helped fuel the fan frenzy that has carried over to the other installments in the series:

· 55% said the first Twilight movie inspired them to read all the books by Stephenie Meyer.

· 51% plan to see New Moon more than once in the theater.

· 61% said they have read the novel New Moon more than once.

Fandango is also offering exclusive limited edition New Moon gift cards (featuring images of Edward & Bella, Jacob & The Wolf Pack and other characters), redeemable for any movie on www.fandango.com. Details can be found at http://www.fandango.com/Twilightgifts.