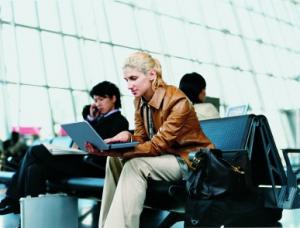 “We’re very happy to extend our Holiday Wi-Fi gift to the millions of people who will spend time in airports over the next few months,” said Marissa Mayer, Vice President of Search Products and User Experience at Google. “We know that this is a very hectic travel season for people, and we hope that free Wi-Fi will make both traveling and connecting with friends and family a little bit easier.”

“As a pioneer in providing complimentary Wi-Fi to airport customers, we are very excited about Google partnering with McCarran International along with other airports across the country to bring holiday cheer to so many travelers,” said Rosemary A. Vassiliadis, Deputy Director, Clark County Department of Aviation

“Indianapolis International Airport is thrilled to be a part of the Google Holiday Wi-Fi campaign,” said Jeremiah Wise, Treasurer, Indianapolis Airport Authority. “Free and open access to the Internet has been a key passenger service initiative since the opening of our new airport. The involvement of sponsors such as Google helps to ensure we can continue to keep Wi-Fi free.”

The upcoming Thanksgiving, Christmas and New Year’s holiday is one of the heaviest travel seasons of the year, and according to FAA estimates, over 100 million people will pass through the participating airports between now and January 15, 2010. Due to bad weather and other extenuating circumstances, travelers often have extra time on their hands in the airport after they pass through security – 70 minutes, on average. Not surprisingly, having an Internet connection during this time can make a difference. A recent study conducted by the Wi-Fi Alliance reported that 50% of business travelers take red-eye flights in order to be “reachable” during business hours, and an overwhelming 82% said that being connected through Wi-Fi would help solve that problem.

“Google gets this year’s Wi-Fi Santa award for sponsoring complimentary access in dozens of airports, both to the traveler’s and airport’s benefit,” said Dave Hagan, president and CEO of Boingo Wireless. “In addition to the obvious bonus holiday travelers will enjoy, sponsored access will increase overall Wi-Fi usage in the participating airports and help supplement the airport’s increasingly important non-airline incremental revenue.”

“Google’s sponsorship of free Wi-Fi in the airports during this holiday season is a welcome gift to airports and Wi-Fi operators alike that continue to strive to find the balance between customer service and revenue concerns; especially during these difficult economic times,” said Scott Phillips, President and CEO of Advanced Wireless Group and Electronic Media Systems.

As another way to pass on the spirit of the season, once they log on to networks in any of the participating airports, travelers will have the option make a donation to Engineers Without Borders, the One Economy Corporation or the Climate Savers Computing Initiative. Google will match the donations made across all the networks up to $250,000, and the airport network that generates the highest amount per passenger by January 1, 2010 will receive $15,000 to donate to the local nonprofit of their choice.

More information about the networks, including a full list of participating airports, is available at www.freeholidaywifi.com.

About Google Inc.
Google’s innovative search technologies connect millions of people around the world with information every day. Founded in 1998 by Stanford Ph.D. students Larry Page and Sergey Brin, Google today is a top Web property in all major global markets. Google’s targeted advertising program provides businesses of all sizes with measurable results, while enhancing the overall Web experience for users. Google is headquartered in Silicon Valley with offices throughout the Americas, Europe and Asia. For more information, visit www.google.com.