Search Gets Up Close and Personal 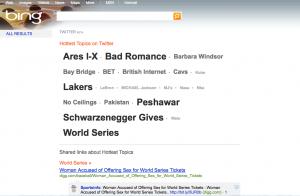 The online world has been buzzing about the topic for weeks, even months—real-time search. The search engine bigwigs are brokering deals left and right to start serving personal search results.

Announced last week, Microsoft’s Bing has brokered a deal with Twitter to begin showing tweets in its search results. Found at Bing.com/Twitter, the Twitter powered real-time search is in its beta phase.

At the same time, Microsoft also announced a strategic partnership with Facebook, allowing Bing access to Facebook status updates. Details on when it will go live have yet to be announced.

A Google-Facebook deal, however, has been noticeably absent.

All of these deals, many are speculating, amount to search’s first steps into real-time search. At the same time, however, search engines are getting more personal.

Google’s “Social Search”, launched Monday, will serve relevant, and recently updated, postings from within a user’s social circle—tweets, statuses, blog postings, and more. Also in its beta phase, Social Search highlights results from a user’s gmail chat buddies and contacts, family and co-workers, and anyone else from within their online network.

Yahoo!, on the other hand, seem to have taken a different approach. Making a bit of a splash with their global ad campaign ‘You’, Yahoo! has not been brokering deals with the social networking giants.

Yahoo! has instead kept busy upgrading their various services, focusing on a personalized Yahoo! environment. Homepage content can now be personalized, Yahoo! mail is simplified, Yahoo! messenger now includes video calling, and a host of mobile apps have been introduced, including Flickr.

Yahoo! has yet to announce its pursuit of real-time search, although the internet is alight with speculation. Rumors have been circulating that the Yahoo! has partnered with the existing, though little-known, real-time search engine One Riot. The partnership is expected to launch soon.

Yahoo! execs have yet to confirm the deal, announce a launch date, or if it will even pursue real-time search, and for now, it is merely online speculation.