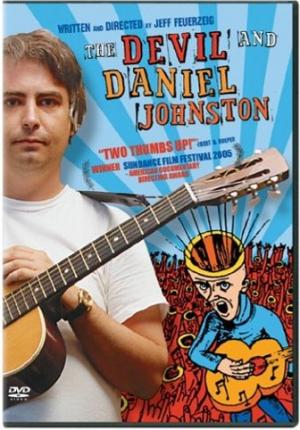 The Fall is bursting with music in Montreal, as many artists choose this time of the year to give concerts. October 16th the Montreal’s Ukranian Federation was proud to welcome on stage legendary musician, singer and songwriter Daniel Johnston, to cover his repertoire of  Beatles’songs, and to sing about Casper, Laurie and the devil.

The opening act, the Capital Years entertained the audience as it did in Washington, New York and Boston during this North-American tour.  The musical introduction  was misleadingly instrumental, as it quickly became melodic pop rock, with noticeable Pink Floyd and Beatles influences.

Once their set was completed, Daniel Johnston finally made his entrance on the stage. It was the kind of sudden and abrupt appearance that reflects his impulsive personality. Right away, Johnston started his three-song solo set, alone with his guitar and partitions. Then he exited the stage only to return with his acoustic guitarist for a second set that begun with Johnston asking the crowd “Are you still here?”. The audience answered with shouts and applause. This set consisted of another three songs, the last one being The Beatles’ You’ve Got to Hide You’re Love Away, to which the audience sang along.

Johnston then walked off the stage once again, leaving the audience wondering what was going to happen next. The Capital Years appeared back on stage, but the crowd wanted Johnston and weren’t quiet at expressing it. Fortunately, he walked back onto the stage for a complete third set with the band, jokingly calling themselves The Beatles. After the first song, Johnston told the audience about a dream he had recently, concerning a man who got sentenced to death for trying to commit suicide, and that man was himself. The crowd was keen on such a random story, bleak and yet told with humor. Johnston played a few songs from his new album Is and Always Was (Eternal Yip Eye Music, 2009), but also many of his older tunes, such as Speeding Motorcycle, were performed with incredible energy. He also sang John Lennon’s Isolation, and The Beatles’ I’m So Tired. After his last song Rock & Roll/Ega, he thanked the audience and left the stage while the musicians finished off the tune.

For his encore, Daniel Johnston received a standing ovation, singing True Love Will Find You in the End (on the album Retired Boxer, 1984).

Johnston born in Sacramento, California, currently resides in Walter, Texas. It was there that his career started to take shape in the 80’s, thanks to a good old fashioned method that consisted of handing out tones of home-recorded tapes and performing live. Though he’s been making music and recording albums since the late 1970’s, Johnston isn’t your typical mainstream rocker. Diagnosed with bipolar disorder, also commonly known as manic depression, the musician has been through constant emotional turmoil, going in and out of mental hospitals and struggling to find the right medication for his condition. Though his severe mood swings have forever been challenging, his trials and life experiences may have contributed to his artistry known for its innocence and authenticity.

Daniel Johnston’s music isn’t about the right chords or the flawless rhymes; it is first and foremost about truth, about the open expression of genuine thoughts and abstract emotions put into simple notes and unpretentious lyrics.

To know more about this artist, the 2005 documentary entitled The Devil and Daniel Johnston, directed by Jeff Feuerzeig (who received the Directing Award at the Sundance Film Festival) offers a clear and insightful approach on Johnston’s life and art, which brings to light a better understanding of his music.