Clinton: World Will Not Wait for Iran 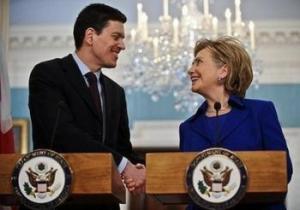 On the second day of her swing through Europe, U.S. Secretary of State Hillary Clinton discussed a wide range of pressing international issues at her stop in London.

Secretary of State Hillary Clinton began the British leg of her trip with a meeting with British Foreign Secretary David Miliband.

On Iran, Miliband said the time was right for the country to move in a new direction.

Later this month, U.N. inspectors expect to see the recently disclosed uranium enrichment facility near the city of Qom and more talks are planned for Geneva.

Secretary of State Clinton said the United States and others are willing to listen to Iran, but she warned that patience will not last forever and she urged the Iranians to make constructive inroads soon.

“We are speaking with a single voice and delivering a clear message to Iran,” Clinton said. “The international community will not wait indefinitely for evidence that Iran is prepared to live up to its international obligations.”

On Afghanistan, Miliband said Britain was closely watching the strategy review the U.S. administration is currently going through and how that might impact upon the British effort there.

“There are big decisions ahead, above all for the new Afghan government which will be formed in the next few weeks, but there are also decisions for the whole of the coalition led by the United States,” Miliband said.

Clinton said whatever path was taken out of the strategic review, the United States would be there to support Afghanistan.

“We are committed to Afghanistan,” Clinton said. “We are very clear that the conjunction of al-Qaida and elements of the Taliban and other extremists pose a direct threat to our two countries and really to the world.”

Asked about the attack and the hostage drama that unfolded over the weekend at a Pakistani military complex near the capital, Clinton responded it was a difficult time for the country but she stressed that the authorities there were firmly in control.

“We have confidence in the Pakistani government and military’s control over nuclear weapons,” Clinton said. “The recent attack at Rawalpindi that went right at a military installation is another reminder that the extremists in Pakistan, whatever their titles or whatever their affiliation are increasingly threatening the authority of the state but we see no evidence that they are going to take over the state.”

The Secretary of State then met with Prime Minister Gordon Brown before flying off for further discussions in Dublin and Belfast.