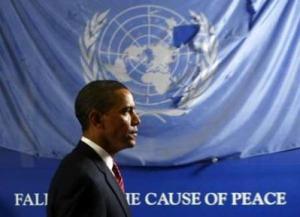 “I am surprised and humbled,” says President Obama on winning the Nobel Peace Price, further calling  the honor  “a call for action”

The Nobel committee said it awarded him the prize for his “extraordinary work to strengthen international diplomacy”.

Friday’s surprise announcement that President Barack Obama would be awarded the Nobel Peace Prize drew both praise from backers of the president and criticism from some of his harshest critics.

The decision makes Mr. Obama the third sitting U.S. president to receive the Nobel, following Theodore Roosevelt and Woodrow Wilson. And while the award comes just nine months into his first term, the Nobel Committee praised Mr. Obama for reinvigorating international diplomacy and providing hope for a better future.

“His diplomacy is founded in the concept that those who are to lead the world must do so on the basis of values and attitudes that are shared by the majority of the world’s population,” the committee said.

Allies in Europe applauded the decision. Jose Barroso, president of the European Commission, called the award “a tribute to President Obama’s commitment to the values of peace and progress of humanity.”

President Obama also earned praise from Prime Minister Morgan Tsvangarai of Zimbabwe, who had been among the favorites for this year’s Peace Prize. “I wish to congratulate President Obama,” Tsvangarai told Reuters. “I think he is a deserving candidate.”

Arch Bishop Desmond Tutu of South Africa, himself a former peace prize recipient, said, “It is an award that speaks to the promise of President Obama’s message of hope.”

Another former winner of the Peace Prize, Mikhail Gorbachev, said: “In these hard times people who are capable of taking responsibility, who have a vision, commitment and political will should be supported.”

“We are not upset and we hope that by receiving this prize he will start taking practical steps to remove injustice in the world,” an aide to Iranian President Mahmoud Ahmadinejad said. “We hope that this gives him the incentive to walk in the path of bringing justice to the world order,” said Ali Akbar Javanfekr, Ahmadinejad’s media aide.

Mohammed Elbaradei, who is working with President Obama to keep nuclear weapons away from Iran in his post as director general of the International Atomic Energy Agency, said he was “absolutely delighted,” adding: “I cannot think of anyone today more deserving of this honor.”

In Afghanistan, where President Obama is working to develop a new war strategy, President Hamid Karzai offered congratulations. “His hard work and his new vision on global relations, his will and efforts for creating friendly and good relations at global level and global peace make him the appropriate recipient of the Nobel Peace Prize,” Karzai told the Agence France-Presse.

In the Middle East, where the president is seeking to kick-start the peace process, reaction was mixed.

President Shimon Peres of Israel, a Peace Prize winner, said President Obama offered “humanity with fresh hope, with intellectual determination, and a feeling that there is a lord in heaven and believers on earth.”

Danny Danon, a member of the ruling Likud Party, said the president has yet to accomplish enough to earn the prize.

“This is the first time the award is given for wishful thinking,” Danon said.

Danon’s sentiment was echoed by Ahmed Yousef, deputy foreign minister of Hamas. “We congratulate him for this,” said Yousef. But, “we believe he has been rewarded or judged based on good intentions towards peace but not on his achievement.”

The prize is worth the equivalent of $1.4 million and will be awarded in Oslo on Dec. 10.

Compiled from wire reports and other media sources