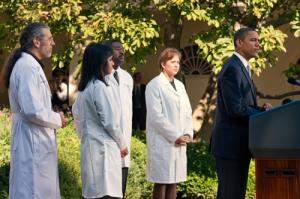 On the eve of one of the most critical weeks in the health care reform debate, President Obama gathered in the Rose Garden on Monday, October 5 2009, with doctors supportive of his health care bill.

“But when you cut through all the noise and all the distractions that are out there, I think what’s most telling is that some of the people who are most supportive of reform are the very medical professionals who know the health care system best — the doctors and nurses of America,” President Obama told doctors and reporters yesterday.

Nothing new came out of yesterday’s speech to the 150 lab-coated doctors representing all 50 states. President Obama simply reiterated the three pillars of his proposed reform—expanded and affordable options for the uninsured, greater protections for the insured, and time for preventive healing and care to doctors.

The Finance Committee is widely expected to pass their version of the bill later this week. The vote was originally scheduled for today but according to Sen. Debbie Stabenow, D-Mich., speaking to the Associated Press, the Congressional Budget office is still going over the numbers.

Last week, the Finance Committee lowered the penalties for not carrying health insurance. According to Sen. Stabenow, there simply isn’t enough money in the $900-billion budget to provide the subsidy to all middle-class Americans. She estimates that the bill, if passed in its current state, would cover about 92-93% of Americans, down from 95% in its earlier version.

Once the Senate Finance Committee passes the bill this week, Senate Democratic leaders will be tasked to combine this bill with the version passed by the Health, Education, Labor and Pension Committee—a significantly more liberal-leaning bill—before the floor can be opened for debate.

The House is facing a similar problem before their debate as well.

Some information for this report provided by AP.