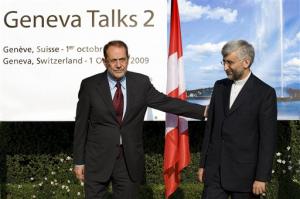 Following the seven-and-a-half hour talks Thursday between the five U.N. Security Council countries plus Germany and Iran regarding Iran’s aggressive and ambiguous nuclear enrichment program, a US Senior Official told reporters that Iran agreed to the US’s proposal “in principle”.

Another meeting has been scheduled, led by the International Atomic Energy Agency (IAEA), October 18 2009 in Vienna to negotiate the details.

The Senior Official, speaking to the press with anonymity, calling the agreement a “positive interim step”, told reporters that the talks helped to create a “more diplomatic space to pursue Iran’s compliance with its obligations under the Security Council Resolutions, the NPT and the IAEA, and to tackle the more fundamental question of Iran’s nuclear program.”

During the 45-minute lunch break, US and Iran officials met in an one-on-one sidebar, during which the US reinforced the positions made in the general meeting and privately stressed “the need for the Iranians to take concrete and practical steps” in proving that “its program is exclusively peaceful in nature.”

Previously, the US and Iran had reached a stalemate. Since July of 2008, Iran had unequivocally refused to discuss the issue. Thursday’s talks mark the beginning of an intense diplomatic process between the two countries that is likely to last months before a resolution is reached.