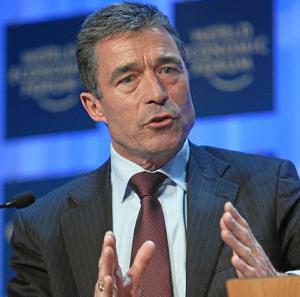 NATO’s new secretary-general says the alliance remains committed to the fight in Afghanistan, despite greater violence in the country and a rising death toll among U.S. and NATO troops. Anders Fogh Rasmussen acknowledged that more resources will be needed to battle Taliban militants at a time when public support in many allied nations for continued operations in Afghanistan is waning.

In his first Washington address since assuming NATO leadership last month, Secretary-General Rasmussen said he understands America’s desire to see its NATO allies commit more troops and resources to Afghanistan. But he defended the contributions already made in the eight-year campaign.

“I will not accept from anyone the argument that the Europeans and the Canadians are not paying the price for success in Afghanistan,” said Anders Fogh Rasmussen. “They are. Afghanistan does not suggest that NATO is past its prime [outdated]. It proves just the opposite. The solidarity built up over 60 years is being strongly tested in Afghanistan. And it is holding up over years, despite casualties and setbacks.”

Rasmussen noted that all 28 NATO members are taking part in the mission and that non-U.S. troop commitments have risen by 9,000 in 18 months. He responded directly to NATO critics in the United States, including some in Congress who have accused European governments of shirking responsibilities.

“Talking down the European and Canadian contributions, as some here in the United States do on occasion, can become a self-fulfilling prophecy,” Rasmussen said. “If they do not feel as if their efforts and sacrifices in NATO are recognized and valued, they will be less inclined to make those efforts and those sacrifices. And that is not in anyone’s interest.”

The Netherlands and Canada have set schedules to withdraw troops from Afghanistan. Meanwhile, the Obama administration is conducting a strategic review of the mission in Afghanistan, after sending an additional 21,000 U.S. forces to the country. In a report that was leaked to the news media, the top commander of U.S. and NATO forces in Afghanistan recently warned of mission failure unless more troops and resources are devoted to the effort.

Despite continuing challenges in Afghanistan, the NATO leader said the ongoing mission is indicative of NATO’s continued relevance. That point was echoed by U.S. Senator Richard Lugar.

“I do not believe that Afghanistan defines the success or failure of NATO,” Lugar said. “I am impressed by the fact that a number of NATO nations have sent troops. They have stayed. And largely, I suspect, it is because of their feelings of alliance with the United States and with each other.”

Even so, Secretary General Rasmussen said NATO cannot remain in Afghanistan indefinitely. He urged accelerated training and equipping of Afghan security forces, saying that, ultimately, the Afghan people must take the lead in stabilizing their country.