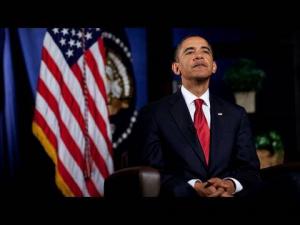 WASHINGTON – In this week’s address, President Barack Obama recounted the progress made this past week in advancing America’s national security and economic prosperity at the United Nations and the G-20. The administration established the U.S. as a leader in the pursuit for clean energy, and agreed to reform the global financial system to prevent another crisis. Also, the President joined the first meeting between Israeli and Palestinian leaders in nearly a year, chaired a meeting of the UN Security Council, which passed a resolution to secure loose nuclear materials, and stood in agreement with our European allies and Russia that Iran must not acquire nuclear weapons.

The audio and video will be available at 6:00am Saturday, September 26, 2009 at www.whitehouse.gov.

This week, I joined leaders from around the world at the United Nations and the G-20 economic summit in Pittsburgh. Today, I can report on what we achieved—a new commitment to meet common challenges, and real progress in advancing America’s national security and economic prosperity.

As I said at the U.N., over the past nine months my administration has renewed American leadership, and pursued a new era of engagement in which we call upon all nations to live up to their responsibilities. This week, our engagement produced tangible results in several areas.

In Pittsburgh, the world’s major economies agreed to continue our effort to spur global demand to put our people back to work. We committed ourselves to economic growth that is balanced and sustained— so that we avoid the booms and busts of the past. We reached an historic agreement to reform the global financial system—to promote responsibility and prevent abuse so that we never face a crisis like this again. And we reformed our international economic architecture, so that we can better coordinate our effort to meet the challenges of the 21st century.

We also established American leadership in the global pursuit of the clean energy of the 21st century. I am proud that the G-20 nations agreed to phase out $300 billion worth of fossil fuel subsidies. This will increase our energy security, reduce greenhouse gas emissions, combat the threat of climate change, and help create the new jobs and industries of the future.

In New York, we advanced the cause of peace and security. I joined the first meeting between Israeli and Palestinian leaders in nearly a year—a meeting that even nine months ago did not seem possible. And we resolved to move forward in the journey toward a just, lasting and comprehensive peace in the Middle East.

We also took unprecedented steps to secure loose nuclear materials; to stop the spread of nuclear weapons; and to seek a world without them. As the first U.S. president to ever chair a meeting of the United Nations Security Council, I was proud that the Council passed an historic and unanimous resolution embracing the comprehensive strategy I outlined this year in Prague.

To prevent nuclear weapons from falling into the hands of terrorists, the Security Council endorsed our global effort to lock down all vulnerable material within four years. We reaffirmed the basic compact of the global nonproliferation regime: all nations have the right to peaceful nuclear energy; nations with nuclear weapons have the responsibility to move toward disarmament; and nations without them have the responsibility to forsake them.

Earlier this year, we imposed tough, new, sanctions on North Korea to stop their efforts to develop weapons of mass destruction. And we will continue to stand with our allies and partners to press North Korea to move in a new direction.

This week, we joined with the United Kingdom and France in presenting evidence that Iran has been building a secret nuclear facility to enrich uranium. This is a serious challenge to the global nonproliferation regime, and continues a disturbing pattern of Iranian evasion. That is why international negotiations with Iran scheduled for October 1st now take on added urgency.

My offer of a serious, meaningful dialogue to resolve this issue remains open. But Iran must now cooperate fully with the International Atomic Energy Agency, and take action to demonstrate its peaceful intentions.

On this, the international community is more united than ever before. Yesterday, I stood shoulder-to-shoulder with our European allies in condemning Iran’s program. In our meetings and public statements, President Medvedev of Russia and I agreed that Iran must pursue a new course or face consequences. All of the permanent members of the United Nations Security Council, and Germany, have made it clear that Iran must fulfill its responsibilities.

Iran’s leaders must now choose – they can live up to their responsibilities and achieve integration with the community of nations. Or they will face increased pressure and isolation, and deny opportunity to their own people.

These are the urgent threats of our time. And the United States is committed to a new chapter of international cooperation to meet them. This new chapter will not be written in one week or even one year. But we have begun. And for the American people and the people of the world, it will mean greater security and prosperity for years to come