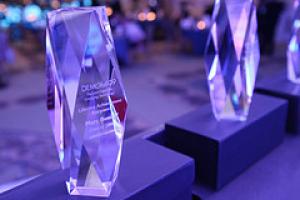 As DEMOfall09 wrapped up Wednesday night in San Diego, the much-anticipated awards were presented, including the IDG Million Dollar Media Prize for People’s Choice, presented to Emo Labs Inc. and Liaise, Inc.

This year’s ceremony, officiated by Co-Executive Producers Chris Shipley, her last, and Matt Marshall, his first, also included the presentation of the Lifetime Achievement awards to 16 past-participants and the DEMOgod award, presented to the most exceptional products at the conference in seven categories.

Liaise, Inc., the Sunnyvale, CA company, was recognized as the People’s Choice Enterprise Award for their “Business Interaction Management” tool. Using Liaise, key points—the tasks, assignments, deadlines, issues, and priorities that are included in all business communications—are captured and managed. Working inside emails, IMs, and other digital communications, capturing and management is automated, integrating with users’ calendars, while providing reports and summaries. Liaise effectively changes the way work is managed without changing the way work is done.

Emo Labs Inc. and Liaise Inc will both receive a six-month advertising campaign, that includes print and online ad space across various IDG properties, including Computerworld and PC Magazine, the DEMO website, and VentureBeat.com.

Other awards presented last night include 16 Lifetime Achievement Awards to past presenters for their significant contribution to the advancements of technology. Winners included Colin Angle and Helen Greiner of iRobot, Marc Benoit of Salesforce.com, Ed Colligan, Donna Dubinsky and Jeff Hawkins of Palm, Inc., and Kevin Lynch of Adobe Systems. Each participated in an interactive forum where DEMO attendees heard from and asked questions.

The DEMOgod Award, for most exceptional products of the conference showing outstanding potential to succeed in the market, was presented to seven winners, including Emo Labs Inc., Intellus Inc. for their DateCheck, and Twirl TV among others.