DEMOfall09: First Day of Demonstrations and Pitches Delivers As Promised 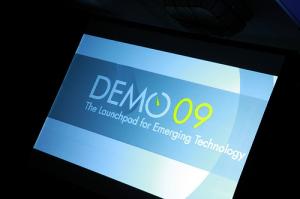 Tuesday, September 22 2009, was the first day of demonstrations and pitches at DEMOfall09 in San Diego. The first day, which showcased about half of the 56 launches and 14 AlphaPitches, surely did not disappoint, featuring a variety of new technologies from software to hardware, from smartphone to desktop applications, from consumer gadgets to technologies that will change how we do business.

In its 19th edition, this year’s proceedings were opened by remarks from the outgoing Executive Producer Chris Shipley.

Matt Marshall, her incumbent, followed up saying “I am both encouraged and inspired by the dynamic, exceptional group of companies debuting here, despite the range of economic challenges we are facing on a global scale. I see endless possibilities for the array of innovation coming out of here, both from demonstrators and AlphaPitch companies.”

AlphaPitch company Diditz has already caused quite a stir. A Facebook tool, Diditz allows users to convert their photo and video albums into indexed web pages that can integrate across all social media sites, thus creating an innovative marketing tool yet to be seen on any social networking platform. Facebook pages could then, theoretically, be leveraged as a moneymaking viral marketing tool.

Ringful, another early-stage company announcing during the AlphaPitch, is a smartphone app that allows users to work with their health care professionals to build health monitoring records stored in the smartphone as a “personal dashboard”. Ringful has the potential to lower health care costs, both individually and on a larger-scale as adoption grows, by promoting preventive care.

If Tuesday’s Demonstrator presentations are any indication, smartphone apps are here to stay. Micello, from Sunnyvale CA, is the Google Maps of the indoors. An iPhone app, Micello provides users with maps of indoor spaces, from shopping malls to convention centers, searchable right down to an individual space-level. Need to know where a shoe store is in the mall? Micello will display all in-mall results. Services will also include an API allowing others to leverage the mapping-system. Currently the Micello team averages ten new locations a day, with hopes to increase their daily efficiency to 100.

Other personal technologies launched yesterday included Lunchster, a fully integrated software that automatically schedules lunches with nearby friends and colleagues, Digsby from dotSyntax, a desktop application that manages IMs, emails, and user’s social network accounts from one centralized location, and Rseven Mobile, which aggregates from user’s cell phone all calls, texts, and pictures, presenting the information as an online timeline.