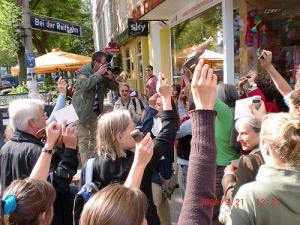 Tuesday morning, President Obama addressed the head of state summit on climate change in New York, the world’s largest summit of its kind. The UN Secretary-General Ban Ki-moon convened the summit, one of several high-level meetings leading to the United Nations’ Climate Change Conference, scheduled for December in Copenhagen.

The UN Climate Change Conference will look to renew the Kyoto Protocol, which expires in 2013.

President Obama opened the summit with his remarks, reaffirming the US commitment to addressing climate change and to discussing effective, realistic solutions.

UN Secretary-General Ban Ki-moon, as well as environmentalists, is calling for an effective, fair, and ambitious global response to the issue. The UN summit kicked off Climate Week and sparked thousands of events worldwide. Avaaz.org, a global online hub for activists to organize and mobilise, spearheaded the Global Climate Wake Up Call. Monday morning, September 21 2009, in over 2,000 organized events across 130 countries, tens of thousands of phone calls were placed to key world leaders and environment ministers.

In the US, the White House phone lines were flooded; trees were planted in San Jose dos Campos, Brazil. Various tribes in Kenya participated, and groups in Kinshasa of the Democratic Republic of Congo marched to town hall to present their petition.

“This is the climate movement we’ve been waiting for,” said Rick Patel, Executive Director of Avaaz.org. “The idea of a global wake up call snowballed in just 3 weeks into a massive mobilisation. We’re aiming for an ambitious, fair and binding treaty that stops catastrophic climate change, and we won’t stop until we get it”.

In a separate event, Canada’s Prime Minister Stephen Harper was delivered a 15-metre-long scroll of personal messages in Calgary, AB.

Although not on the official schedule, climate change will also be addressed at the G20 Summit when it convenes Thursday, September 24 2009, in Pittsburgh, PA.

Some information for this report provided by the CBC.