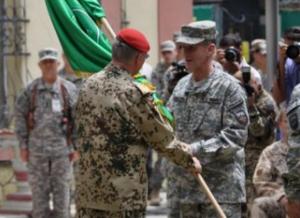 A report from the new U.S. and NATO commander in Afghanistan says there is an urgent need for more foreign troops and civilians, more Afghan forces and a new strategic approach to reverse Taliban gains.

The frank and mostly gloomy assessment by U.S. Army General Stanley McChrystal is still officially secret, but the Washington Post published an unclassified version Monday, which it says has only a few deletions requested by the government.

In the document, the general, who arrived in Afghanistan in June, says “success is not ensured by additional forces alone, but continued under-resourcing will likely cause failure.”

He writes the U.S. and NATO effort has long been “under-resourced,” and that must change within 12 months or the coalition “risks an outcome where defeating the insurgency is no longer possible.” He says a lack of even the “minimum” resources is “a recipe for failure” in a counterinsurgency,” and the Taliban and related groups have made significant gains in recent years as a result.

General McChrystal says while the Afghan government and military “must ultimately defeat the insurgency,” the coalition can not wait for the Afghans to be capable enough to do the job alone.

Although the Washington Post published most of the document on its website, Pentagon Spokesman Bryan Whitman declined to discuss its details, calling it “pre-decisional” and “classified.” “The national security team, to include the commander-in-chief, have it. They are reviewing it. They will use it to help them make decisions about the future. The secretary (of Defense) is absorbing the assessment along with the president. If there are decisions that flow from that, they will make them at the appropriate time,” the spokesman said.

Whitman would not say when General McChrystal will make his expected detailed request for more troops, or when a decision might be made.

On the president’s aircraft Monday, White House Press Secretary Robert Gibbs told reporters while the general may want more troops he does not expect a formal request for a little while. “We are going to conduct that strategic assessment and do that in a way that lays out the best path forward before we make resource decisions, rather than having this go the other way around where one makes resources decisions and then finds a strategy,” Gibbs said.

Gibbs said any decision on troop levels will wait until the conclusion of a broader assessment of the way forward in Afghanistan, of which he indicated General McChrystal’s document is only one part.

Last week, U.S. Defense Secretary Robert Gates appealed for patience, saying these are extremely important decisions, and the president should be given the time to get them right. The secretary indicated he, the president and other senior officials have sent questions to General McChrystal about his assessment, and are awaiting his answers.

In the document, the general is sharply critical of NATO forces, saying they are “poorly configured” to fight an insurgency. He says if NATO countries continue to be “pre-occupied” with protecting their forces rather than protecting the people and accomplishing the mission, they “run the risk of strategic defeat.” He says the coalition must operate “dramatically differently — even uncomfortably differently.”

He also repeats some of his earlier calls for more civilian help and a new approach by his troops that makes the security of the Afghan people their top priority. He says the coalition is in a “war of ideas,” in which he says it must demonstrate its commitment and its ability to deliver security without causing undue civilian casualties.

In a VOA interview, Afghanistan Ambassador to the United Nations Zahir Tanin endorsed General McChrystal’s sense of urgency, and his view that while a comprehensive approach is needed, security comes first. “From a military point of view, I think without enough resources, without the ability to stop the Taliban’s advances, it would be very difficult to make any progress in other areas, including political progress in Afghanistan,” Tanin said.

Ambassador Tanin said General McChrystal is in the best position to assess the security needs and if there is a need for more forces, the Afghan government must support such a request.

He also rejected concerns expressed by some, including Secretary Gates, that sending more foreign troops could alienate the Afghan people. The ambassador says the key for Afghans is not how many foreign troops there are or what strategy they implement, but whether they deliver security and defeat the insurgents.

In the report, General McChrystal concludes that “while the situation is serious, success is still achievable.” But he says the effort needs “a fundamentally new approach” that is “properly resourced and supported” throughout the coalition and across military and civilian agencies.