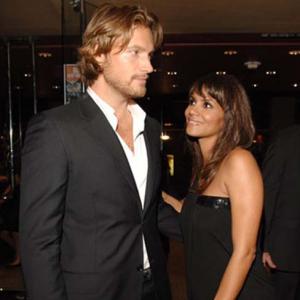 Stunning Halle Berry (43) confessed on Jay Leno last Thursday to have fallen for Montreal-born Gabriel Aubry (34) on a bus. Not that the gorgeous international model was riding it but she spotted him on the side of the bus, thinking to herself “That’s a good looking man.” As luck would have it, a few days later, walking in for a photo shoot for a Versace ad, here was that good looking man in the flesh and blood, and they hit off. The rest, as they say, is history.

Berry is now expecting their second child, reports the Boston Globe, a little more than a year after the birth of their daughter, named Nahla Ariela Aubry, born on March 16, 2008.  The second child was conceived using artificial insemination, while Nahla was conceived in-vitro.

Four years has gone by since that faithful first meeting and for Berry, who has been married twice before, it is cause for celebration, she told Leno.

Her first mariage to baseball player David Justice ended in allegations of spousal abuse, while the second one to musician Eric Benét, took a turn for the worst, when the musician admitted to a sex-addiction.

Berry, becoming the first and, as of 2009, only woman of African American descent to have won the award for Best Actress for her part in “Monster’s Ball” is known for fighting to get parts that do not only showcase her beauty but stretch her acting ability. For instance, playing twice a drug addict in “Losing Isaiah” and Spike Lee’s “Jungle Fever”.  Berry has also been a “Bond” girl, putting an end to the Hollywood rumor, or some like to say curse, that once a Bond Girl, no roles are to follow. According to Variety magazine, Berry will be starring in a new feature film, the upcoming action-thriller “Dark Tide,” with shooting in South Africa to begin later this year.

It has been reported that Aubry would like to move the family away from Los Angeles to New York city to better pursue his modeling career.

Berry has sworn off mariage during a 2004 taping of Oprah, insisting that she would never get married again, to which Oprah replied “Never say never.”