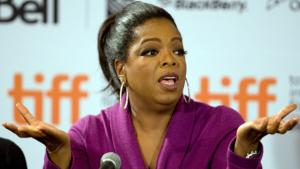 The Toronto International Film Festival Saturday, giving the Oprah Winfrey-produced film some early momentum heading into Oscar awards season. The film, a gritty tale of the abuse and redemption of a teenage girl in Harlem, captured the festival’s People’s Choice award, which is voted on by filmgoers. Last year it went to best picture Oscar winner “Slumdog Millionaire.” Critics have roundly praised “Precious” since its debut at the Sundance Film Festival in January, and audiences in Toronto warmly received the film, which is directed by Lee Daniels and will hit theaters in November.

“I made this film for every person out there who ever looked in the mirror and felt unsure about the person looking back,” Daniels, who is traveling in Spain, said in a statement read out at an awards reception in Toronto. In addition to “Slumdog Millionaire,” past winners of the award that have gone on to win the best picture Oscar include “American Beauty” and “Chariots of Fire.”

The festival, which wraps up later Saturday with a red-carpet screening of “The Young Victoria,” a look at the British queen’s early years, was notable this year for a lack of distribution deals signed as the independent film industry remains mired in a near two-year funk. More than one-third of the more than 330 films screened entered the festival without distribution deals, and barely a handful were announced during the event’s 10-day run. Festival co-director Piers Handling said he expects more deals involving Toronto-screened films to soon be announced, but said the days of festival bidding wars were likely over.

“It’s a combination of just an increasingly conservative marketplace in North America, the recession, as well as a glut of product,” he told Reuters after the awards presentation. “I think there will be fewer films being made.” Other winners included critics’ awards for “The Man Beyond the Bridge,” an Indian production featuring the little-used language of Konkani, and “Hadewijch,” a French film that looks at the possibilities and consequences of a devoutly religious life.

The audience award for top documentary went to “The Topp Twins,” which tells the story of a New Zealand lesbian country and western singing duo. Memorable moments at this year’s Toronto International Film Festival according to Canadian Press. The Toronto International Film Festival ended on the weekend after unspooling more than 300 films during a 10-day cinematic marathon. The Canadian Press writers who covered the fest pick some memorable moments.

“Capitalism: A Love Story” – Two decades of kicking at the establishment culminates in Michael Moore’s most focused work in years. It’s nothing short of a rallying cry to dismantle U.S.-style capitalism and replace rampant greed with the democracy that Americans profess to love so dearly.

“The Damned United” – The based-on-a-true-story film of soccer manager Brian Clough’s disastrous 44 days with Leeds United crackles with wit and energy and, despite its macho backdrop, proves to be a moving bromance.

“Daybreakers” – This unusual vampire film turns the genre on its head by presenting night-dwellers as the majority of society and humans as the outsiders. Ethan Hawke applies a furrowed brow to his turn as vamp-with-a-conscience, but things thankfully never get too serious and the ensuing mayhem builds toward a fun – and bloody – payoff.

“Defendor” – Not your average superhero tale. It’s set in Hamilton, Ont., no less. Woody Harrelson plays a troubled man who believes he’s a crime-fighting avenger, and has the black tights and duct-taped letter “D” on his shirt to prove it. His weaponry includes a handful of marbles, some bees in a jar and lime juice, but deftly drawn characters and smart twists reveal a much more nuanced tale than the slapstick premise would suggest.

“An Education” – Newcomer Carey Mulligan sparkles in this stylish tale of a clever London schoolgirl caught under the spell of a mysterious older man (Peter Sarsgaard). With a knockout script from novelist Nick Hornby. “Good Hair” – In this rollicking documentary, comedian Chris Rock takes a look at the billion-dollar business of African-American hair care. While the film is informative and, yes, very funny, it’s also surprisingly tender. Rock began the project after one of his two young daughters innocently asked him why she didn’t have “good hair.”

“The Joneses” – This satire on consumerism starring Demi Moore and David Duchovny is hugely entertaining, with a clever premise supported by a terrific cast. “The Trotsky” – Jay Baruchel stars in this coming-of-age tale about an eccentric 17-year-old who believes he’s the reincarnation of Bolshevik revolutionary Leon Trotsky. Baruchel’s winning performance ignites a snappy script from writer-director Jacob Tierney, who has crafted a winsome love letter to Montreal complete with a humdinger of a soundtrack from local indie standouts Malajube. “Up in the Air” – “Juno” director Jason Reitman has come of age in this exquisitely crafted black comedy about corporate America. Bolstered by an excellent soundtrack and a startling show of vulnerability by George Clooney.

BEST PERFORMANCES: Abbie Cornish – This Australian beauty takes full command of Jane Campion’s sharp script in “Bright Star,” imbuing Fanny Brawne – outspoken fashion designer and girlfriend of poet John Keats – with a subtle spunk that is shattered at the film’s conclusion. David Duchovny – Is there anyone better at playing the good-hearted charmer than Duchovny? The “Californication” star is a sheer delight to watch in festival gem “The Joneses.” George Clooney – The actor known for an excess of suave shows a softer side in “Up in the Air” that will, no doubt, only make women love him all the more. Mo’Nique – And the Oscar goes to … Mo’Nique? Sure, her previous film credits include dubious titles like “Phat Girls” and “Beerfest,” but the comedienne/talk show host is electrifying in “Precious: Based on the Novel ‘Push’ by Sapphire,” as the abusive mother of an obese teen. Nicolas Cage – Cage unleashes one of his most ludicrously unhinged performances yet in “Bad Lieutenant: Port of Call New Orleans.” Michael Sheen – His portrayal of soccer manager Brian Clough in “The Damned United” is another winner, following triumphant turns as Tony Blair in “The Queen” and David Frost in “Frost/Nixon.” Robin Wright Penn – Wright Penn is nuanced and restrained as the title character in “The Private Lives of Pippa Lee,” based on the book by Rebecca Miller. D

OWNERS: Who said movie-going was supposed to be fun? With subjects like incest (”Precious: Based on the Novel ‘Push’ by Sapphire”), genital mutilation (”Antichrist”) and cataclysmic environmental and societal breakdown (”The Road”), several films at this year’s festival left viewers shell-shocked. Viggo Mortensen’s survival tale “The Road” features a particularly gruesome scene that rivals those of the “Saw” franchise, while “Precious” – despite some spellbinding performances – is relentlessly depressing in its subject matter.

GAFFES: Two reels were inadvertently shown out of sequence at a critics’ screening of Terry Gilliam’s “The Imaginarium of Doctor Parnassus,” but the film is so cryptic that some in attendance didn’t realize the gaffe. Publicists hastily scheduled another screening, offering reporters a free breakfast to make up for the error. Gilliam, meanwhile, later said the slip-up made him “want to kill.” Another screening snafu occurred at a press showing of Jane Campion’s “Bright Star.” Just at the movie’s heart-stopping climax, as poet John Keats lays dying from tuberculosis, the film suddenly turned upside down and the characters began speaking gibberish. Technicians could not fix the problem, and miffed critics had to see the rest of the film on another day.

MOST PERSONABLE STARS: Viggo Mortensen bestowed a reporter with a gift from his native Argentina, Kristin Scott Thomas held a light for a photographer, Robert Duvall urged a reporter to “dig in” to a plate of fruit he ordered, and Michael Moore refused to heed a publicist’s demands to end a roundtable discussion until each journalist in attendance had a question asked and answered. Other affable celebs included Ricky Gervais, Werner Herzog, Jason Reitman, Michael Douglas, Aidan Quinn and Jay Baruchel. SNACKING STARS: Kodi Smit-McPhee, the 13-year-old star of “The Road,” jokingly requested Scotch and ice cream when a handler asked what he wanted to eat. Montreal native Jay Baruchel noshed on a meal from McDonald’s, complete with super-sized soda. And Terry Gilliam mused about the real contents of his bright-yellow vitamin-water drink. By Canadian Press film festival reporters Victoria Ahearn, Andrea Baillie, Gregory Bonnell, Nick Patch and Cassandra Szklarski.