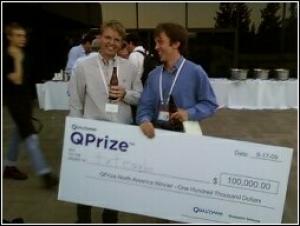 The service, now live in Kenya and plans to expand to the Dominican Republic and Rwanda later this year, includes a mobile payment platform that encourages saving. “With one dollar at the time, txteagle, can improve the poor’s standard of living,” Jeff Gasan told RPRN. “A dollar makes a difference in their life, and makes good business sense.”

The QPrize awards international business plans, with Semi-Finalist sessions in Europe, India, China and North America. Out of eight selected companies, one Semi-Finalist is chosen from each session. Each Semi-Finalist then moves to the Grand Prize competition, to be held later this year, for a chance to win an additional $150,000 in funding.

Last night’s conference included discussions on various factors surrounding mobile technology businesses large and small, from monetization strategies, to analytics, and market impact, as lead by various industry leaders and stakeholders, as well as a demo session of some of today’s hottest mobile applications. The demo session included Visuvi, the image-based search platform and winners of Spring 2009 Plug and Play Expo conference.