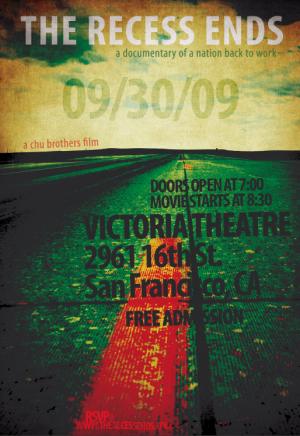 San Francisco, CA, Sept, 30th, 2009 at 8:30 PM, filmmakers Brian and Austin Chu of San Francisco will be throwing a movie premiere for “The Recess Ends”, a national documentary on the recession at the legendary Victoria Theatre in the Mission District of San Francisco.

The Recess Ends film project is based on a five- month journey across the United States in search of personal stories about greatest economic meltdown since the Great Depression. Filmmakers Brian and Austin Chu, two everyday guys turned filmmakers decided to travel to all 50 states to capture these stories.

“As we traveled across the United States we were completely amazed by what we saw,” said Austin Chu. “We got a chance to see how the recession was affecting the entire country and how Americans in different cities and states were dealing with the current economic crisis. We saw everything from people destroying their old homes because they were worth more to them damaged to a family taking in other people who had lost their jobs and lost their way, to even a man who was selling his own blood to get by during the recession.

“Our film captures a snapshot of what our country is going through right now,” said Brian Chu. “It shows us how some Americans are struggling, while others are reprioritizing their lives and finding creative ways to get by. Some of the stories in the film will show hope as well as America’s character and resilience. Our film will also show that America will emerge very different after this crisis. We believe in many ways the recession has brought communities together and has displayed the true hearts of the American people.”

After the movie premiere, Austin and Brian will be throwing a small reception where people can talk to the filmmakers about their project and ask questions. Attendees can also pre-order a DVD copy of the film, which will cost $20 dollars.

Austin and Brian began their trip in San Diego, CA on Jan.24th, 2009 and ended their journey June 1st, 2009 in San Francisco, CA. They traveled through all 50 states including Alaska and Hawaii.

About Austin and Brian Chu: Brothers Austin and Brian Chu are both independent filmmakers and entrepreneurs from San Francisco, CA. Austin is also a social media strategist and has worked for for RoadtripNation, a PBS documentary series that follows the adventures of roadtripping students as they criss-cross the nation in an RV interviewing people who have designed their own routes through life. He is also an editor and contributor for The Matador Network, a unique and fresh travel blog. Brian Chu is an editor, a production coordinator and a camera operator for Fitness Anywhere, a consumer products company in the physical wellness market. Brian graduated from San Francisco State University with a B.A in Television & Radio with an emphasis in video production.

About The Recess Ends: Austin Chu first came up with the idea of doing a documentary on the recession when he lost his job at the internet startup he worked for. Austin wanted to do something about what was going on and thought it would be great to travel the nation and tell the story of the biggest economic collapse that faces our country since the Great Depression. He felt the true story is not necessarily about the recession itself, but rather the great Americans who face it each and every day in their own unique way.

For more information on The Recess Ends please go to: http://therecessends.com, visit our Facebook fan page, orfollow us on Twitter.

Official Trailer: The Recess Ends from B-Rilla on Vimeo.