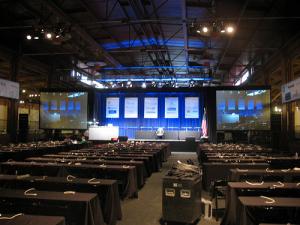 Monday, September 14 2009, marked the first day of the annual TechCrunch50 conference, a leading emerging technology conference in Silicon Valley. The two-day competition-based conference, now in its third year, draws startups from around the world. The top presenting company, recipient of the Best in Show Award, will be chosen by a panel of experts and conference organizers, announced during tomorrow’s closing ceremonies.

Along with the Best in Show Award, which includes a $50,000 prize and approximately $1.3 million in partner-sponsored advertising, other awards to be presented tomorrow include the Audience Choice Award, Best Mobile Startup, Best International Startup, and others.

ODesk, a Menlo Park, CA startup with $29 million in funding, provides an online tech services marketplace where buyers and providers from around the world can build business relationships. With pay by the hour and project management capabilities, buyers can manage projects as though working with a local team. Buyers can hire, track projects via webcam and access to timeslots, and pay service providers all through the oDesk online platform. Employees can seek jobs, track payments, and are given direct contact with employers.

Yourversion, today’s second DemoPit Winner and based out of Palo Alto, CA, is a real-time ‘discovery engine’ that serves new, personally relevant web content based on the user’s specific interests. Participation at the TechCrunch50 was the company’s official public launch, which also incorporates bookmarking and sharing capabilities, and an iPhone app.

Penn Jillette, of the magic-duo Penn and Teller, kicked off today’s events with his presentation the official Penn and Teller mobile app. The app allows users to look as though they know the duo personally, performing a card trick with them via faux-text messages.