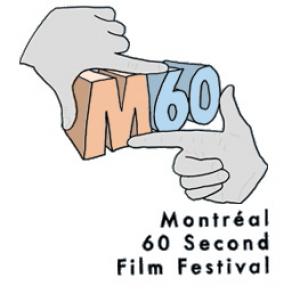 The Montreal 60 Second Film Festival (M60) is back for the second year in a row. Yesterday was opening night at Sala Rossa, and it was a huge success!

M60 is a non-profit event founded in 2008 and organized by Toby Harper, Doug Hollingworth, Lily Lanken, Sylvan Lanken and Sean Michaels. Everyone is eligible to enter their film in the festival; the only restriction is that it must be 60 seconds long. This unique concept is a chance for all Montrealers, regardless of their age, their filmmaking experience and their budget, to take on the challenge of making a short film and having it projected on big screen for family, friends and strangers to admire.

Last night, Sala Rossa opened it’s doors at around 8:00 PM to let the fairly young crowd enter the room, find a seat, get a drink at the bar, and prepare for the projection. About an hour later, and after a brief introduction by the organizers, the screening began. The first few minutes were dedicated to a vox pop in which various cats expressed what they thought about this year’s provocative theme being “deception”. Another humorous sketch then announced the beginning of a series of 73 sixty-second films. Most of them were comedies, though some were quite dark. It was amazing to see how different every single project was, and how much potential and imagination these filmmakers must have in order to put together so many original ideas, when it feels like everything’s been done before and every story has been told. It was 73 minutes of humor, crime, drama, mystery, horror, politics, animation and romance, split in half by a twenty-minute intermission to let the spectators stretch their legs and fill their glasses.

Judging by the crowd’s laughter and applause, the night’s favorites seemed to be the following:

1. Every film featuring cats, which includes Deceptive Moustache by Brian Scarth, The Cat by Edmund Nash and King Of Beasts by Mark Visser.

2. Every film featuring dogs, such as Thief by Anna McGarrigle, Hammy Potter by Alex Weldon and Ronit Milo (this documentary-style fiction about a dog that specializes in pottery got an incredibly positive reaction) and Dogs and Socks by Philippe Tatartcheff.

3.Other festival favorites include Bicycle Woes by Marc Tremblay (a parody about bixies), I Am Burrito by Philip Borden (an absurdly comical scene about a man who swallows a cell phone, thinking it’s a burrito), La ensenada del deseo by Douglas Hollingworth and Emilie Marzinotto (a Spanish love triangle parody), iPlay by Gill Green (a lesson on the numerous uses of a Mac computer) and Dialupdeception by Maxd (about Internet connection in the 90’s).

Then again, every film had considerable effort put into it, and it’s not too late to catch the show! The event will take place again tonight as well as Friday (September 10th and 11th) at Sala Rossa, for a mere 7$. It is also possible to buy the DVD of the 73 shorts in order to help finance next year’s 60 Second Film Festival. To celebrate the festival’s closure, an after-party will be held on Friday, following the projection. This could be a great opportunity to have a drink with friends, meet the filmmakers, and discuss movies!