“Among Friends” Fans Are Asking For More! 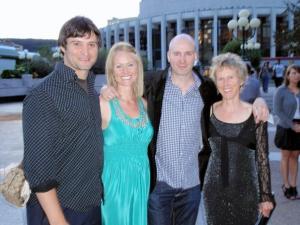 PREMIERE SCREENING OF “AMONG FRIENDS” AT MONTREAL WORLD FILM FESTIVAL A SUCCESS!

Participants celebrated the success of the 33rd Montreal World Film Festival at the closing ceremonies on September 7. About 350,000 filmgoers attended the festival. There were also around 1,000 accredited participants, including producers, directors and other industry professionals. Of approximately 2,000 films submitted, “Among Friends” was one of under 200 short films selected to premiere.

AMONG FRIENDS, a fifteen minute short directed by Geoffrey Uloth of Evergon Arts, was seen and talked about with enthusiasm. On August 29, some two hundred people attended the premiere, which was the first of three screenings. Viewers laughed out loud, dropped into uncomfortable silence, and had much to discuss after seeing the film.  “A great short that is well written, well acted, has some unexpected twists and is definitely funny” member of the audience Paul van den Boom said.

The film is the fifth short of director/editor/filmmaker Geoff Uloth, and the first of co-producers Nicole Braber and Barbara Campbell. Nicole was also one of the lead actors, and Barbara Campbell the writer of this provocative work. Largely self-financed, the project also received substantial post-production support from the National Film Board.

The entire cast and crew was comprised of Montrealers. Viewers reveled in the ambience created by DOP Jean-François Da Sylva-La Rue. They were also blown away by the performances of the six actors: Nicole Braber, Catherine Lipscombe, Carlo Mestroni, Ken Proulx, Adrianne Richards, and Craig Thomas. The intensity of their portrayals was brought to its height by performance director Jock MacDonald.

Director/editor Geoff Uloth is currently finishing a feature screenplay called “Dead Tired,” which has received development support from The Harold Greenberg Fund, Telefilm Canada, and SODEC. Writer/producer Barbara Campbell of Ansuz Productions has a feature script awaiting contest results and has written her next short, ready for development. Actor/producer Nicole Braber is in production for “Fifty Words” which will mount in Montreal in the spring of 2010.

(Note: the original version of this mature-subject-matter film is in English with vulgar language. A non-swearing version is available, as well as one with French subtitles.)

Information on the film, story, production:

Queries about future projects and collaboration: