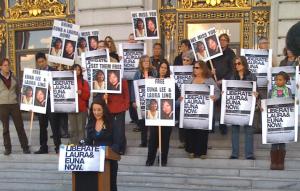 The two American reporters who were jailed for illegally entering North Korea have spoken out about their ordeal for the first time and said they never intended to cross a frozen river into the communist country.

In a lengthy statement that was posted on the Web site of Current TV, Laura Ling and Euna Lee say they hesitantly followed their guide across the waterway, but were firmly back on Chinese soil when North Korean guards grabbed them on March 17.

Lee and Ling say they were violently dragged back across the ice to North Korea and marched to a nearby army base.

The two say that while there were no signs marking China’s frontier with North Korea, they were aware they were moving toward the border crossing as they moved across the frozen Tumen River.

Lee and Ling say that during the 140 days of captivity that followed they were isolated from one another and repeatedly interrogated.

The journalists say that some of their experiences were too painful to revisit, but they wanted to explain why they were in the area and the circumstances surrounding their arrest.

The two traveled to northeastern China to document stories of North Koreans who are smuggled out of the their country, trying to escape poverty and repression, and the difficulties they face.

Before they were captured the two reporters found some North Korean women who found work in the online sex industry and others who had been forced into arranged marriages.

Lee and Ling say that while they were in detention they swallowed their notes, damaged their videotapes and made other efforts to protect the identities of their sources.

The two say that to this day they do not know whether or not they were lured into a trap by their guide.

Lee and Ling were eventually put on trial and sentenced to 12 years of hard labor.

Photo credit: Vigils for Asian American journalists Laura Ling and Euna Lee were held throughout the country on Wed., June 3. Both women, accused by North Korea of crossing into the country illegally from China and committing “hostile acts.” They were tried on criminal charges on June 4th and sentenced to 12 years hard labor.