The Montreal World Film Festival Fans Are Loving It 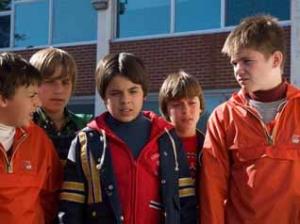 Today is day six of the 2009 Montreal World Film Festival. This year’s festival has been as popular as ever with fans and cinephiles. Early-bird Montrealers have been waking up at 6 AM to catch the very first screening of the day, lining up in front of Cinéma Impérial to get the best seats. By 9 AM, the theatre is nearly full.

The festival’s opening film, 1981, directed by Quebec’s very own rising director Ricardo Trogi (Quebec-Montreal, Dodging the Clock), opened the festival last Thursday. His latest autobiographical creation received well-deserved applause from the audience at the end of the screening. Trogi, iindisposed that morning, was unable to attend the screening.

In 1981, Trogi was 11 years old–an eventful year that inspired him to write this comedy. Young Ricardo (played by Jean-Carl Boucher) discovers the tribulations of adolescence, the superficiality of insignificant objects, the true value of family, and, finally, young love. 1981 is a generational movie that offers insight into the coming of age in the 80’s in Quebec. Trogi’s film is brilliantly acted, especially by Sandrine Bisson who interprets the role of Ricardo’s short-tempered mother, and is one of the few recent Quebecois movies able to truly capture the culture’s essence.

Korkoro, starring Marc Lavoie and Marie-Josée Croze, tells the moving story of a town’s mayor and schoolteacher who do all they can to protect a Roma gypsy family from the law during the Second World War in France. Gatlif’s film is an astonishing work of art, presenting fervent characters, mind-blowing shots, and a tragic and humane storyline overflowing with emotion. Gatlif is a Cannes award winner for Best Director for Exils (2004).

Redland, however, was not as successful. While some absolutely loved it, many clearly did not, leaving half an hour into the screening. Redland is a somewhat strange and timeless film set in a dark rural area of Northern Carolina. On the brink of starvation, a very religious and yet unconventional family fights to survive. The movie is well-directed, the shots and dialogue are extremely poetic, and the actors are remarkable. The occasionally out-of-focus camera work, the numerous stretched-out sequences in which the storyline ceases to progress, the grainy sepia-colored images and the excessive dramatics, are all elements that could easily create a distance between the film and its spectator. However, anyone could tell that Norton’s cinematic culture is vast, and that the works of various great filmmakers have inspired him.

One of the more successful films was Enen (Case Unknown), directed by Polish filmmaker Feliks Falk, who presented the first showing of his movie at Cinéma Impérial on August 29th to glowing reviews. Enen tells the story of a psychiatrist’s (Borys Szyc) attempt to help an abandoned and uncommunicative patient (Grzegorz Wolf) by taking him home, reintegrating him into society and doing whatever it takes to uncover the mystery of his inexistent documents. The humane storyline, the remarkable acting and the unexpected twist of events captured the audience.

Waffenstillstand (Ceasefire) also received a well-deserved applause. German director Lancelot von Naso was also present at Cinéma Impérial on August 30th to to introduce his very first feature film, which recounts the story of two German journalists, a doctor, an international relief organization worker and a driver making their way to Fallujah to bring food supplies and medicine. Waffenstillstand is a very impressive first cinematic attempt.

The Montreal World Film Festival will continue to run until September 7th 2009.