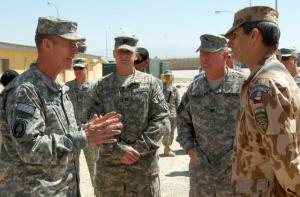 The U.S. and NATO commander in Afghanistan, General Stanley McChrystal, has delivered his eagerly-awaited assessment to his bosses in Washington and Brussels, but the document is being kept secret. Pentagon officials say it will be followed by international consultations and possibly requests for more U.S. and international forces.

According to a NATO release, General McChrystal writes that “the situation in Afghanistan is serious, but success is achievable.” The general is quoted as saying success will require “a revised implementation strategy,” as well as commitment, resolve, and increased unity of effort. But that is all that has been made public.

U.S. Defense Secretary Robert Gates said he has not yet seen the assessment, but told reporters what he expects it to contain.

“I think that his assessment, without having read it, I suspect is going to point to the challenges that remain before us in Afghanistan. I think it will also point to areas where we can do better and can make improvements in our strategy and tactics,” he said.

Some civilian advisers invited to Afghanistan to help General McChrystal prepare his assessment have said he needs more troops to put down a resurgent Taliban and establish security at least in Afghan population centers. Some analyses of the current situation have been fairly dire, including one by the top U.S. military officer, Admiral Mike Mullen, who has said security in Afghanistan is “serious and deteriorating.” But Secretary Gates says he expects a balanced assessment from General McChrystal.

“While there is a lot of gloom and doom going around, I think that General McChrystal’s assessment will be a realistic one and set forth the challenges we have in front of us. And at the same time, I think we have some assets in place and some developments that hold promise,” said the secretary of defense.

Gates noted he has been concerned about sending too many foreign troops to Afghanistan and potentially alienating its people. But he says McChrystal can ask for more troops if he thinks he needs them. Still the secretary he acknowledged it would be difficult to send more U.S. troops to Afghanistan in the short term, and expressed concern about the cost of an increased commitment.

“We have been very explicit that General McChrystal should be forthright in telling us what he needs in order to accomplish the mission that he has been given. And we will look at his assessment and then we will look at the resource recommendations that he makes,” he added.

Secretary Gates also said there have been some positive developments in Afghanistan, including the recent election and the arrival of more U.S. and international troops.

Whitman says any request for additional forces will come only after high-level international consultations.

“I am told it does not include specific recommendations or requests for additional forces or funding, that only after the president and NATO leaders have had discussions related to implementation will there be resourcing options that could be presented or considered at that point,” he said.

Whitman says this assessment is designed to provide an implementation plan for the new strategy President Barack Obama announced in March, which calls for a regional approach and a focus on ensuring Afghanistan does not again become a base for international terrorism, as it was before the September 11 attacks in 2001. The president also approved an increase of more than 20,000 U.S. troops, most of whom have already arrived.

Any request from General McChrystal would be in addition to the authorized total of 68,000 U.S. troops and the current contingent of 37,000 troops from NATO and other partner countries.