US Debate Heats Up on Afghan Troop Levels 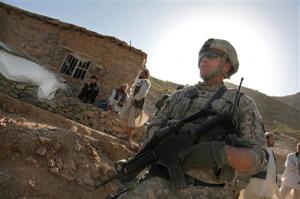 When four American soldiers were killed on Tuesday in southern Afghanistan, 2009 became the deadliest year for foreign forces in the country since the current conflict began nearly eight years ago. The spike in violence and attacks by Taliban insurgents have triggered a debate in the United States about the need to send more troops to Afghanistan.

The United States has 62,000 troops in Afghanistan, nearly double the number from last year. Other countries have about 39,000 there. But many of the NATO soldiers are not allowed to engage in combat or serve in violent areas around the country.

U.S. Defense Secretary Robert Gates has repeatedly urged NATO allies to send more troops and eliminate restrictions on their use.

The new U.S. and NATO commander in Afghanistan, Army General Stanley McChrystal, is preparing a much anticipated assessment of the situation. Pentagon officials say that any request for more forces would likely follow in a separate document.

Bruce Riedel worked for the U.S. Central Intelligence Agency for 30 years and chaired a policy review of Afghanistan and Pakistan earlier this year at the request of U.S. President Barack Obama.

“President Obama inherited a disaster, a war which had been under-resourced, horribly, for at least six of the last 7.5 years and which had suffered as a consequence. Trying to turn that around overnight is an illusion; it is not going to be turned around overnight,” he said.

Riedel predicts that even with additional troops, it will take at least 12-18 months to significantly improve security in Afghanistan.

Anthony Cordesman, a senior military analyst at the Washington-based Center for Strategic and International Studies, is part of a team advising General McChrystal on strategy in Afghanistan.

He says more U.S. forces will be needed, along with a major increase in the number of Afghan soldiers and police.

“U.S. troops are going to be needed because no other country is going to provide them. We are going to find ourselves having to finance a major expansion of the Afghan security forces,” he said.

When President Obama announced his strategy for Afghanistan in March, he said the military would shift its mission to training and increasing the size of the Afghan army and police force.

Mr. Obama also announced a significant increase in U.S. civilians in Afghanistan, such as agricultural specialists, teachers, engineers and lawyers.

But military analyst Anthony Cordesman says that so far, this has not happened.

“We need to stop talking about ‘smart power’ [non-military forms of influence] as if we had it. We do not have the civilians in the field,” he said. “The so-called ‘civilian surge’ will not come close to the minimal requirements. At the end of it, 80 percent of the people doing the civil and aid side of the work will still be in uniform,” he added.

Despite President Obama’s earlier decision to send an additional 17,000 combat troops and 4,000 trainers for Afghan forces, U.S. officials say the security situation in areas infiltrated by the Taliban continues to worsen.

Kimberly Kagan, a military historian who is the President of the Institute for the Study of War, also is part of the group advising General McChrystal.

She says the Taliban insurgency is growing and becoming more sophisticated.

“Particularly in southern Afghanistan, the situation is serious and deteriorating. Likewise in eastern Afghanistan, where we see groups such as the Haqqani network, which have all sorts of links to terrorist groups within Pakistan, including al-Qaida, we actually see an enemy which is becoming more capable of conducting spectacular attacks in the areas immediately around Kabul,” she said.

Kagan recommends a sharp increase in the number of Afghan forces and says more U.S. troops are needed to close what she calls a security gap that only international soldiers can fill during the next several years.

“General McChrystal needs to reallocate forces within Afghanistan to these new priority areas and see to it that they are conducting counterinsurgency and, in my opinion, he will need more troops in order to obtain the kinds of force densities in the places where we have a challenge by the enemy against the population,” said Kagn.

A recent public opinion survey conducted by The Washington Post newspaper found that a majority of Americans say the war in Afghanistan is not worth fighting.

Only 24 percent of those polled say more U.S. troops should be sent to Afghanistan, while nearly twice as many want to decrease the number of military forces there.

Michael O’Hanlon is a foreign policy analyst at the Brookings Institution where he specializes in defense strategy.

“I know the American public’s support for this war is declining. People have a lot of questions about whether we should be in Afghanistan, whether it is becoming the next Vietnam. All these questions are legitimate, in my eye, even though I am a supporter of the mission,” he said.

Defense Secretary Gates says any increase in U.S. forces would come only after consultations with allies and the Afghan government.

He says such an increase would be limited by the U.S. troop commitment in Iraq, which will not be significantly reduced until next year.