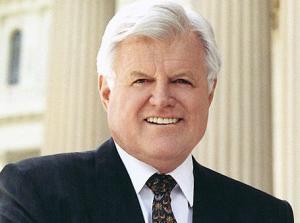 Mourners from all walks of life are filing past the coffin of U.S. Senator Edward Kennedy to pay their respects to the champion of liberalism and the last member of a generation of Kennedy political leaders.

Members of the public began lining up hours before the doors opened Thursday evening to view the flag-draped coffin at the presidential library and museum of the late senator’s brother, slain President John F. Kennedy.

Earlier, a motorcade brought the coffin of Senator Kennedy to the museum from Hyannis Port, where family members held a funeral Mass earlier in the day at the senator’s home.

The Democratic lawmaker died Tuesday at the age of 77, after a year-long battle with brain cancer. He was a senator for nearly 47 years.

Thousands of people are expected to file past the closed casket Thursday and Friday. A private memorial service will be held at the library Friday evening.

President Barack Obama will deliver a eulogy on Saturday at a funeral Mass at a Boston basilica before the senator’s burial at Arlington National Cemetery near Washington.

Tributes poured in Wednesday for Kennedy.

Speaking from Martha’s Vineyard, a seaside resort near Kennedy’s Massachusetts home, Mr. Obama said Kennedy helped make the nation more equal and just. The nation’s first African-American president said Kennedy’s ideas and ideals are in scores of laws and reflected in the lives of millions of people.

The president ordered flags at the White House, the U.S. Capitol building and all other federal buildings to fly at half-staff for the senator.

Lawmakers who served with Kennedy and all living former U.S. presidents praised the late senator for his ability to reach across party lines to pass health care, civil rights and education legislation. The four former presidents, Jimmy Carter, Bill Clinton, George H.W. Bush and his son, George W. Bush, are expected to attend the funeral.

The prime ministers of Britain, Gordon Brown and Ireland, Brian Cowen also are scheduled to attend the Saturday service.

A champion for the poor and defender of the disadvantaged, Senator Kennedy had a passionate, unwavering commitment to his views. With a towering presence in the Senate chamber and his ability to work across the political divide, he earned the nickname “Lion of the Senate.”

Tributes also came in from world leaders, highlighting Kennedy’s dedication to human rights and other issues, such as his work to end apartheid in South Africa and achieve peace in Northern Ireland.

Some information for this report was provided by AP.