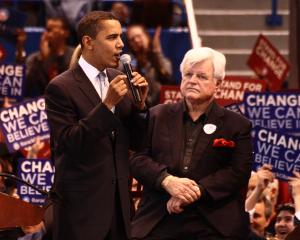 In a written statement released by the White House early Wednesday, Mr. Obama says he and his wife Michelle were “heartbroken” to learn of Kennedy’s death.  The president says he valued the elder lawmaker’s “wise counsel” when they both served in the U.S. Senate, and expressed gratitude for Kennedy’s crucial support during his 2008 presidential campaign.

Mr. Obama is vacationing with his family on Martha’s Vineyard, a seaside resort in Massachusetts, near Kennedy’s home in Hyannis Port, where the senator died.

Nancy Reagan, the widow of the late U.S. President Ronald Reagan, says she considered the late senator “an ally and a dear friend.”  Reagan, whose husband remains a hero of conservative Republicans, says despite her political differences with the stalwart liberal Democrat, they had found common ground on the issue of stem cell research.

Senate Majority Leader Harry Reid says it was “the thrill of my lifetime ” to work with Kennedy, calling him the “patriarch” of the Senate.

California Governor Arnold Schwarzenegger, who is married to Kennedy’s niece, Maria Shriver, called him “the rock of our family,” and a champion of social justice.

British Prime Minister Gordon Brown led the tributes from foreign leaders, saying Kennedy will be mourned “in every continent” as a leader in children’s education and health care.

Australian Prime Minister Kevin Rudd hailed Kennedy as a great American and a “great friend of Australia” who made an extraordinary contribution to America’s role in the world.

Israeli Prime Minister Benjamin Netanyahu called Edward Kennedy a friend of 30 years, “a great champion of a better world,” and a great friend of Israel.

Some information for this report was provided by AFP, AP and Reuters.