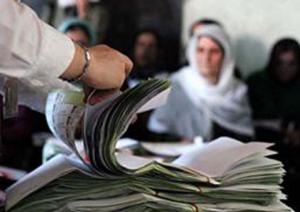 Afghanistan’s Independent Election Commission says President Karzai is leading his closest rival by only 10,000 votes. The tallies released cover only 10 percent of the total and are partial results of 21 provinces, including the capital, Kabul.

IEC spokesman Nur Mohammad Nur tells VOA News these initial results do not give any candidate a basis to declare victory.

“No, it is impossible because these are partial results,” he said. “From today we start and we will update the media and the candidates. It is impossible to judge [who is the winner].”

Election officials say they will release more partial tallies each day this week.

Abdullah, in the meantime, is claiming he has videotape and documents that demonstrate that there were “millions” of fake ballots cast last Thursday.

“We will not allow a big fraud to decide the outcome of the elections. There is no doubt that state-crafted and engineered fraud has been under way,” he said.

Abdullah urged his followers to remain calm and not resort to violence.

Six longshot presidential candidates are warning fraud claims threaten to undermine the election and could trigger violence in this country already torn by a Taliban insurgency.

One of the disgruntled contenders, former finance minister Ashraf Ghani, who is touted as a possible chief executive in the next administration, alleges gunmen told people to vote for Abdullah and officials stuffed ballot boxes in favor of the president.

Afghan voters will not receive word until September 3, at the earliest, as to who won the presidential election. The credibility of the announcement will depend greatly on the reported level of voter turnout in key parts of the country and the seriousness of claims of electoral fraud.

In southern Afghanistan, four American servicemen died when a roadside bomb exploded. The latest casualties make this year the deadliest for foreign forces in the country since the 2001 overthrow of the Taliban.