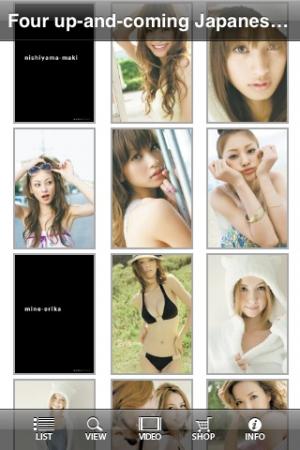 Up-frontier, Inc. today announced a LITE EDITION of its “Four Up-and-Coming Japanese Models” photo book for iPhone and iPod touch, available immediately on the Apple App Store. This photo book captures the true faces of four up-and-coming Japanese models — Maki NIshiyama, Erika Mine, Mikiko Yano, and Jessica Michibata. They all enjoy flourishing modeling careers, and are widening their appeal through TV dramas and acting in Japan. A high quality camera and spirited photographer lifted the private aspects of these models to the realm of a fine art, capturing expressions you’ll never see on TV or in magazines. You can enjoy beautiful photos and video footage from this very special collection for free.

Maki Nishiyama, 23 years old, started as a model for the popular Japanese fashion magazine ‘CanCam’. She widened her career by appearing on TV commercials and various TV shows, and acting as the main charactor in the movie “Hamming Life”. Her extremely funny personality contrasts with her dovelike looks to attract many dedicated fans. She also launched her own fashion brand, Bon Visage, which debuted in 2007, and she published her original book ‘HAPPYSMILE HAPPYLIFE’.

Erika Mine, 25 years old, who grew up with five brothers and sisters, was the second runner-up in the international beauty pageant in 2005. Working mainly in modeling, she also appears on TV dramas and on the educational national TV programs in Japan for the Spanish language. In her personal life, Erika has a totally different face as an expert in traditional Japanese arts such as dance, tea ceremony, and flower arrangement. She played the heroin in the movie ‘Marital quarrel between brother and me’, about Japanese sit-down comedy, Rakugo, in downtown Tokyo.

Mikiko Yano, 22 years old, started her modeling career when she was still a high school girl. Appearing in the teenage girl magazine ‘teengirl’, she now models exclusively for the popular fashion magazine ‘non-no’. Like her energetic and lively look, she loves nature, spends any free time she has visiting the ocean, and she loves swimming.

Jessica Michibata, 24 years old, is one of three sisters who have modeling careers in Japan. Like her sisters, Karen and Angelica, she is enjoying herself as an unsurpassed fasion model. Her mother is Japanese while her father is Argentinian with an Italian and Spanish background. Her flourishing career is cited by an industry person as, ‘There is no fasion magazine on which she is not appearing’. Being known in Europe as the girlfriend of English F1 star Jenson Button, she also writes a regular column on movies in the Japanese magazine, and designs bags and jewelry for a popular brand for young girls called ‘Samantha Thavasa’.

“Four Up-and-Coming Japanese Models — Miki, Erika, Mikiko, and Jessica” is available as a download from Apple’s App Store on iPhone and iPod touch or at http://itunes.apple.com/WebObjects/MZStore.woa/wa/viewSoftware?id=325517272&mt=8

If you want to see more amazing photos from this collection, you can upgrade to the FULL EDITION. The FULL EDITION includes more than 80 pages of beautiful photos and an video, plus the following features:

Up-frontier, a leading widget development and marketing solution provider for businesses in Japan, has launched a new iPhone App label “smartBOOKS” for introducing Japanese content to the world, including photo books, animations, and other motion images. This photo book is the first to be released though smartBOOKS. This September, the new label plans to release various photo albums, books, and short films, including the short film ‘The Celestial Railroad’, produced by KAGAYA. Also to be released in September 2009 are the photo books, ‘FLANDRE 1996 – 1997’, capturing the scenery of Belgium, and ‘ITALY 1985 – 1990’, all photographed by Naomi Kawakami. For more information, please visit http://iphonebooks.nakatree.jp/pc/en_index.html/ or contact Hiroko Newman at press.upfrontier@gmail.com