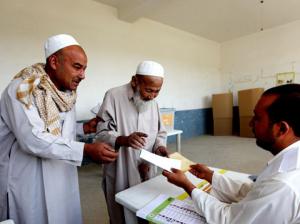 Afghanistan’s election commission says it will release partial results from last week’s presidential elections Tuesday, but complete nationwide preliminary results will not be known for another 10 days.

Zakhilwal said Monday the president received 68 percent of the vote.

On the political front, the United Nations special envoy to Afghanistan, Kai Eide, has appealed for patience as Afghan officials investigate accusations of voter fraud.

And, on the security front, the top U.S. military officer says the situation in Afghanistan is “serious and deteriorating.”

The chairman of the Joint Chiefs of Staff, Admiral Mike Mullen, said in a television interview Sunday that the Taliban insurgency has become more sophisticated in its tactics.

He also expressed concern about waning American public support for the Afghan war.

Feingold said it is time to start discussing such move.  He said after eight years, he is not convinced that pouring more troops into Afghanistan is a well-thought-out strategy. He also expressed concern that sending more troops could destabilize the region.

The Obama administration expects to receive an assessment from its commander in Afghanistan, General Stanley McChrystal, within two weeks.