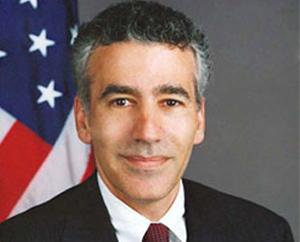 A senior U.S. envoy says Washington is cooperating closely with South Korea to ensure United Nations sanctions against North Korea are carried out. However, Washington is leaving room for the South to revive its economic cooperation with Pyongyang.

U.S. envoy Philip Goldberg said Monday the resumption of a South Korean tourism venture in North Korea and the expansion of a jointly run industrial zone probably would not interfere with enforcement of United Nations sanctions against the North.

“My assessment is that at the moment these are issues outside of that resolution,” Goldberg said. “And there are economic and humanitarian developments that are taken into account in the resolution as well.”

The Obama administration has tasked Goldberg with coordinating implementation of U.N. Security Council resolution 1874, which punishes Pyongyang for its nuclear weapons test in May. The measure imposes strict embargoes on North Korea, and allows for the blacklisting of companies believed to be connected to the North’s weapons programs.

A series of recent overtures from the North has stoked expectations of resumed momentum in North-South economic projects. That culminated over the past few days with a meeting between senior North Korean envoys and South Korean President Lee Myung-bak.

It was the first high-level meeting between the two governments since Mr. Lee took office last year and began to push Pyongyang to give up its nuclear weapons.

“Right now we’re concentrating on implementation–and full implementation – of the resolutions – so you can expect that we will continue with those efforts, yes,” Goldberg said. “Because the goal is denuclearization, and a return to the process that was underway.”

In April, North Korea abandoned nuclear talks involving South Korea, the United States, China, Russia, and Japan. Goldberg says one-on-one meetings between the U.S. and North Korea are possible, but only inside the framework of the six-nation talks.

Separately, South Korea dismissed media speculation that Sunday’s meeting between North Korean envoys and President Lee included talk of a North-South summit. A spokesman for President Lee says he reminded the envoys of his “consistent” policy that the South will only help the North if it gives up its nuclear weapons ambitions.