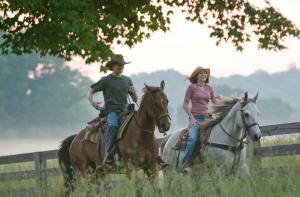 Like Hillary Clinton, Miley Cyrus (a.k.a. Hannah Montana) is a polarizing figure. Either people seem to love her, or they hate her . . . and sometimes without even seeing the 16 year old in action. The age groups that fawn all over Miley/Hannah are mostly impressionable ‘tweens and younger, but I’ll tell you this: Parents could do a lot worse for a role model for their kids.

Miley, of course, is the daughter of country singer Billy Ray Cyrus–he of the “Achy Breaky Heart”–and she’s the star of the hit Disney Channel series “Hannah Montana.” In it, she plays a remarkably close version of herself, an illusion that’s helped by the casting of Billy Ray as her TV father as well. In the show she’s Miley Stewart, whose Dad Robby Ray is a singer-songwriter and whose brother is a ne’er-do-well goofball who lives for sibling rivalry and practical jokes. Like a teen-princess version of a superhero, Miley is an average brunette high school student by day, but a blonde wig-wearing pop star by night. The ruse is supposed to enable her to live a normal life, but the structure also rather shrewdly appeals to young girls who secretly (or perhaps not-so-secretly) harbor pop star dreams of their own. I recently took a Disney Cruise, and girls as young as four were belting out karaoke versions of Hannah Montana hits onstage. “Hannah Montana” is a legitimate phenomenon.

The TV show reminds me a lot of the old “I Love Lucy” series, with Miley doing a darned good job of handling Lucille Ball-style comedy and Emily Osment functioning as both the obligatory teen best friend and the kind of partner-in-comedy-crime that Vivian Vance provided for Lucy. Even the situations seem straight out of the Lucy playbook. And probably true to high-school form, the boys play the “clowns,” with Miley’s brother Jackson (Jason Earles), guy-friend Oliver (Mitchel Musso), and little annoying Rico (Moises Arias) providing even broader comedy.

In this film, Hannah is having a hard time balancing her pop-star career and obligations to family and friends. When she gets into a headline-grabbing fight with Tyra Banks over a pair of shoes and steals best-friend Lilly’s thunder at her sweet sixteen party, her dad packs her off to Tennessee so she can rediscover who she is. The plot itself is a familiar one–the big-city success who discovers what Thomas Wolfe said, that it’s tough to go home again–but like every conflicted movie character before her (Miley gets her head straight and realizes how important her roots are. And of course helping her find herself is a love interest, a cowboy-hat-wearing young man she knew when she was little. The characters may be different, but we’ve seen the formula before in such films as “Sweet Home Alabama” (2002) and “Hope Floats” (1998).

I think so, but don’t expect an extended version of a TV episode. The first thing you notice is that it doesn’t contain nearly the same amount of slapstick comedy. The whole tone is more warm and serious than it is silly. So much so, in fact, that when Jackson gets his keester chomped at a wildlife park by an alligator, the comedy seems intrusive. The other thing you notice is the soundtrack. The TV show begins with the catchy “Best of Both Worlds” theme song and occasionally tosses in a half-performance, but sweet niblets, “Hannah Montana: The Movie” is full of tunes–and good ones, too. Miley sings a duet with her dad, a hip-hop country fusion number, a pretty straight country song, a few ballads, and the expected complement of Hannah Montana pop songs. Billy Ray also has a solo song, as does Taylor Swift, with a few Steve Rushton and Rascal Flatts tunes as well. There are 18 songs in all, and they’re integrated pretty well into the narrative:

“Hannah Montana: The Movie” is directed by Peter Chelsom, who gave us “Shall We Dance” (2004), and while the pacing slows down in Tennessee so viewers can vicariously smell the roses (and manure) with Miley, it’s crisp enough throughout to hold the interest of the target audience. Sidekick Emily Osment is a perky and engaging as always, and Earles and Arias gratefully tone it down a bit. As for the “guest” stars, that shoe scuffle with real model Banks is a hoot, but it’s Vanessa Williams (“Ugly Betty”) who surprises as Hannah’s press agent Vita. She throws herself into not only the role but the whole Tennessee stomp. The writers gave Robby Ray a love interest too (Melora Hardin), though in their attempt to diminish it so it doesn’t compete with Miley’s they’ve all but taken the life out of it. And maybe Lucal Till (who played young Jack Cash in “Walk the Line”) is the perfect choice to play a shy, unassuming, down-home guy, he’s a little too nondescript–dull, even. While it’s a formula film and he’s supposed to represent the antithesis of glitter and glamour, it’s still hard to believe that he’s the best of that world that Miley could find. The rest of “Hannah Montana: The Movie” is populated by stock characters–people like Margo Martindale as her down-home “nanna,” or Beau Billingslea as the mayor. It’s the formula and sterotypes that drag this down to a 6. But Miley and the TV cast carryovers hold up their end, and that should satisfy fans. The themes are wholesome, too: the importance of family, being true to your friends, and being true to yourself

Celebrating the Beginning of Summer at the Strawberry Fest

Sharing with our community about the who we are, what we do, and upcoming events at the Stoney Creek Strawberry Fest STONEY CREEK, Ontario – GFA