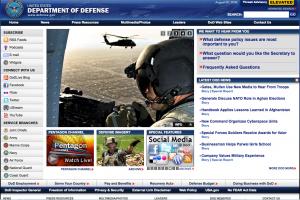 The U.S. Defense Department has become the latest establishment organization to venture into the Internet world of social networking. Officials from the generation of regular old mail, and maybe email, are trying to tweet, blog, post and “friend.”

It was just a few years ago, it seems, that email was a new, even exciting, way to communicate. Nowadays it is old hat. Send an email. Wait for a response. Usually it only involves two people.

The new way of communicating, known as social media or social networking, involves a potentially huge audience observing the conversation, and joining in. “They’re for having dialogue and real-time conversations,” said social media expert Geoff Livingston, a fellow at the Society for New Communications Research and author of a book on new media called “Now is Gone.” He says the new concept behind such popular websites as Facebook, MySpace and Twitter creates both a challenge and an opportunity for any organization, like a government department, that wants to get a message out to the people it cares about.

“The issue that most organizations, military, government or just a plain old corporation, seem to have with social media is actually engaging people,” he said.

It is that idea of engaging, interacting with, an audience that is new to organizations accustomed to one-way public communication, like putting out news releases. And on social media websites the engagement is very public, and may include audio and video.

U.S. Navy Petty Officer William Selby is on one of the Pentagon’s YouTube channels, inviting anyone, and everyone, to post a video question for the senior U.S. military officer, the Chairman of the Joint Chiefs of Staff, Admiral Mike Mullen. Social networking has been largely a young people’s domain, but the 62-year-old admiral has embraced it.

“For leaders – I mean, I’ll take myself in particular – I think, it’s really important to be connected to that and understand it, certainly not be as facile as they [young people] are on it, but to understand because I think communicating that way and moving information around that way, whether it’s administrative information or information in warfare, is absolutely critical,” Mullen said.

He even posted a short about one of the most controversial issues facing the U.S. military, whether to allow homosexuals to serve openly. “There’s a lot of focus with respect to this right now, and certainly when the law changes, we get to that point, we’ll carry out the law,” he said.

Surprisingly, when the admiral posted his comments to his more than 2,000 Facebook fans, he received only one comment, and that was greetings from an old friend.

Admiral Mullen’s 65-year-old boss, U.S. Defense Secretary Robert Gates, admits the admiral is “more technologically advanced” than he is, but he’s trying to change that. Gates says he wants to use social media to reach young people, especially the two million members of the U.S. military – average age about 22.

“How do we communicate better with them? How do we – how do we get reactions from them to things that we’re doing? How do we get better plugged in with what they’re thinking? Also, in terms of our strategic communications, that’s the age, or if not younger, of many of the people around the world we are trying to reach. And how do we reach them in a way that they understand?,” he said.

And Gates noted the impact of communicating by Twitter during the recent unrest in Iran. “You know, if you can’t text, then you Twitter. And you know, my guess is, in some of these countries, that the leadership is kind of like me. They don’t have a clue what it’s about,” he said.

But Gates’ effort to use social media to reach the troops is being slowed by computer networking specialists in his own department. They’re worried about malicious hackers using social networking sites to get into the unclassified part of the Pentagon’s network. A new policy on troops and defense department civilians accessing such websites while at work is expected soon.

The man Gates wants to move the Defense Department into the realm of social media is his new public affairs chief, Price Floyd. “It’s not the same message in a different bottle. The kind of communication, the back-and-forth, the engagement, the dialogue that happens is substantially different. Not only do we get to hear back from people whom our policies may affect, but that engagement may, in essence, change our policies,” he said.

The U.S. Defense Department’s primary audiences for this effort are the troops, their families and the American public. But with the Internet, it gets an international audience at the same time.

“If those people overseas are seen to have an opportunity to engage, be heard and listen, that even if they may disagree with the policy they will have seen the policy develop in a way that they did have a voice in its development. And therefore I think their support or at least not their active antipathy will happen,” he said.

Floyd acknowledges this is a new world for officials accustomed to just putting out a message. Ceding a measure of control over that message to anyone who happens to click into a website is something no public affairs officer would have done until recently. But social media expert Geoff Livingston says that is exactly what they must do to take full advantage of this new way of communicating.

“DoD’s job is to become a great host, and allow a phenomenal networking event to occur online, and allow these people to talk amongst themselves and have real conversations, and be available to answer questions as necessary,” he said.

Pentagon official Price Floyd gets that. Using a military analogy, he says the defense department “didn’t want to leave the field” of the new social media, and allow it to be a place for other people to talk about defense issues without having any input of its own.