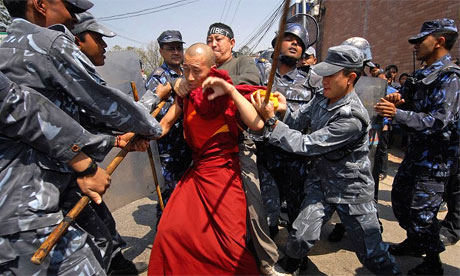 Chinese authorities have placed a curfew on Tibetan Buddhist monasteries during the Olympics, confining monks and forbidding travel to Beijing, sources said.

XINING, China (RUSHPRNEWS)AUGUST 14, 2008– Tibetan Buddhist monk walks along a pathway at Kumbum monastery in China’s Qinghai province on August 5, 2008. WASHINGTON-Authorities in Tibetan areas of western China have placed a curfew on Tibetan Buddhist monasteries during the Olympics, forbidding Tibetans from traveling to Beijing and confining some monks around the clock, informed sources said.

“Since the beginning of August, many monks have been confined to their monasteries day and night,” a spokesman for the Tibetan government-in-exile in India said.

“In some places, monasteries are closing their doors after 7 p.m.”

A lama at the Longwu monastery, in Tongren county in the Huangnan [in Tibetan, Malho] Tibetan Autonomous Prefecture of Qinghai province, said none of the monks there was allowed to leave.

“We just stay inside the monastery now,” he said. “[Chinese officials] said so.”

The Longwu monastery was the scene of mass demonstrations led by monks during Tibetan unrest beginning in March.

One senior lama, Khaso Rinpoche, was injured in March during clashes with armed police. His assistant said he was now recovering in a hospital in Xining city and was able to walk with a crutch, although he had not returned to the monastery since the unrest.

At Bora monastery, in Xiahe county in the Gannan [in Tibetan, Kanlho] Tibetan Autonomous Prefecture of Gansu province, Chinese authorities prohibited the performance of an annual ritual “deer dance” scheduled for Aug. 8, Tashi Gyaltsen, a Tibetan monk living in India, said, citing his own sources in the region.

“The monastery is surrounded by police, and a 24-hour watch is kept on the monks … The monks were warned of serious consequences if they leave the monastery,” Tashi Gyaltsen said.

Meanwhile, government-in-exile spokesman Kalsang said monks at the prominent Drepung monastery in the Tibetan capital, Lhasa, had been cut off from contact with the outside world.

“No phone calls made to the monastery are answered,” he said. “People suspect that the monks’ cellphones have been confiscated.”

Tibetans in western China say the authorities fear a repeat of the protests against Chinese rule that gripped the Tibet Autonomous Region and Tibetan areas of the provinces of Qinghai, Sichuan, and Gansu five months ago.

Monks near the Kumbum monastery in Xining said they would be unable to go to the Olympics as spectators because the railway station had refused to sell them tickets. E-mail services to the monastery have also been discontinued until after the Olympics, they told Agence France-Presse.

Unrest erupted in the Tibetan capital Lhasa on March 14 after four days of peaceful protests, turning into a day of riots targeting ethnic Han Chinese businesses and residents.

China reacted by sending in a massive force of People’s Armed Police to quell the unrest, sealing the Tibetan region off from contact with the outside world.

Exiled Tibetan leaders say 203 people died throughout the region in the violence that followed, while Beijing says 22 people died, only one of them Tibetan.