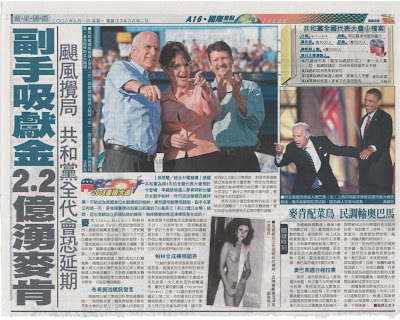 Sarah Palin’s Naked Photos – Don’t Believe Everything You read (or see) On the Internet, including this article! (NSFW)

LOS ANGELES, CA (RUSHPRNEWS) 09/01/2008–Long live the Internet, God damn the Internet! It seems that with every passing day, the wide reach of the Internet, and its ability to spin news stories this way and that, some true and some completely false, is having more and more of an impact on the reading public.

And with the racy topless photos of an unknown woman making the Internet rounds on blogs and on websites worldwide, all purporting to be photos of Sarah Palin, Republican Vice-Presidential candidate (and they’re not!), the Information MegaSuperFreeway is getting harder to fathom.

First piece of advice for novice political scientists and archivists of the early 21st Century: don’t trust anything you read on the Internet. Double check, triple check, everything. Read between the lines. And most important of all: don’t believe everything you read.

As you know those alleged photos of Sarah Palin were not photos of her in a toga, and they were not photos of the actress Julia Louis-Dreyfus, either. So who was it? And who found that photo and who started passing it around as genuine? And even more pressing: who believed it was really Governor Palin in her early days, and who didn’t believe one word (or pixel) of it?

Take a look at this halfpage news article in a Taiwanese newspaper called The Apple Daily http://kodiakkonfidential.blogspot.com/2008/08/so-is-this-taiwanese-paper-trying-to.html .

I can’t read Chinese, but I’m told that this tabloid in Taipei told readers there that the photo was an old picture of Sarah Palin in a toga. The article also said that a spokesman for John McCain’s campaign team said the photo was fake. What do you think most readers in Taiwan concluded?

Other people online said things like: “Turns out it’s actually actress Julia Louis-Dreyfus.” Others said: “It’s not Julia at all.”

So who was in that photo, and why did it circulate so heatedly around the Internet and why oh why does anyone care? Was this just a sick trick of some political operatives, out to spoil someone’s coming out party? Has politics and gossip devovled to such a sorry state? The sad thing is that the damage is already done. Millions of people around the world will already have decided that was Palin in the photo, and millions more will remember her as the woman who posed in a toga. And yet nothing could be further from the truth?

The truth is hard thing to come by these days, and it’s getting harder and harder to find the truth in today’s blogged-up world. A woman gioes to South Korea and says she cloned five dogs from her old pet’s ear and then she leaves South Korea a few days without her new puppies — in disgrace. The news wire stories said she had “cloned’ the dogs, but did she? Who knows the truth behind this story? Do you?

A man says he is goiing to “sell his life” on eBay in an online auction, and there are news stories about him all over the world. But does he ever sell his life, and does anyone ever buy it? Google and find out the truth behind this story, too. The newspapers never released a followup on “the auction that didn’t succeed”.

Maybe we should believe just half of what we see, what we hear, what we read. Maybe we should just believe 30 percent of it all, or perhaps just ten percent. I think we should all go back to that old saying from Missouri that teaches: “”I’m from Missouri, the show me state. Show me, face to face, and then I will believe it. Until then, never!”

About the author: Dan Bloom is a Rush PR News political and environmental news columnist/reporter and a freelance writer from Boston, who has been based in Asia since 1991. He graduated from Tufts University in 1971 and has worked in media, public relations and education in several countries. He is currently doing research on climate change and global warming as the founder of the Polar Cities Research Institute. His email is: danbloom@RushPRnews.com