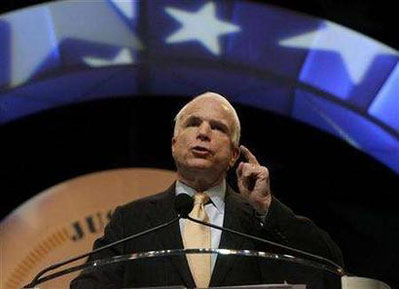 WASHINGTON(RUSHPRNEWS) AUGUST 4, 2008-– Intensified attacks by Republican John McCain on the character of his Democratic opponent have coincided with Barack Obama losing a nine percentage point advantage in a national poll, which showed the candidates running dead even over the weekend.
Republican presidential candidate Senator John McCain ) addresses supporters during a campaign stop at the NAACP National Convention in Cincinnati, Ohio, July 16, 2008.

McCain, who had vowed to avoid the kind of negative tactics that were used against him in the 2000 Republican primary contest with George W. Bush, began attacking Obama during the Illinois senator’s trip to Iraq and Afghanistan late last month.

Related readings:
Economic models predict clear Obama win in November
Explosive issue of race hits Obama-McCain campaign
McCain ad compares Obama to celebrities like Hilton, Spears
In the course of the McCain offensive, Obama’s lead in a Gallup Poll tracking survey slid from nine percentage points on July 26, when he returned from overseas, to nothing by Saturday, when the poll showed the candidates tied at 44 percent.

The four-term Arizona senator, who backed the war and claims experience with security and foreign policy issues, charged that Obama’s promise to withdraw U.S. forces from Iraq within 16 months of taking office amounted to his having chosen to lose a war to promote his run for the presidency.

McCain has not relented even though he took criticism for the remark. It appeared at the time to be a defensive response to the massive attention paid to the Obama visit to the two U.S. war fronts as well as to the Middle East and Europe.

He subsequently ran a television ad that accused Obama of deciding not to visit wounded U.S. troops because he could not take television cameras — a claim that appeared to be false. Next he issued a commercial that interpose images of Obama with pop culture figures Britney Spears and Paris Hilton, trying to paint Obama as a celebrity without the experience to lead the country.

That was followed by accusations that Obama, who would be the first black U.S. president, had resorted to racial politics by asserting McCain and other Republicans would try to frighten Americans because Obama did not look like past U.S. presidents whose images are on the country’s paper money.

And most recently, in an Internet advertisement, the voiceover calls Obama “The One” and features Obama appearing to describe himself and his presidential quest in grandiose terms. It ends with Charlton Heston as Moses parting the Red Sea in the movie, “The Ten Commandments.”

Obama may have given McCain more fodder in recent days by announcing a readiness to compromise with Republicans on offshore oil drilling — which he had opposed — and apparently rejecting McCain’s challenge to join him in a series of town hall meetings.

On Saturday, Obama said McCain’s campaign was cynical and trying to distract voters from real issues but that he did not believe his opponent and his campaign had engaged in racism.

“In no way do I think John McCain’s campaign was racist. I think they are cynical,” Obama said. “Their team is good at creating distractions and engaging in negative attacks.”