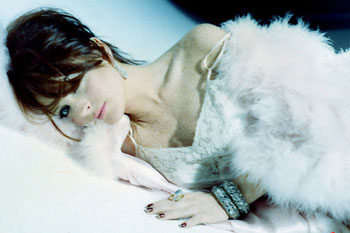 Former host Lindsay Lohan has made it a “Georgia Rule” to be at the Movie Awards every year. After hosting and winning an award in 2004 and nabbing two awards in 2005, Lohan will be back this year to present a Golden Popcorn trophy to someone else. It could be BeyoncÃ©, Johnny Depp or even Sacha Baron Cohen â€” all of whom are up for the coveted awards (see “MTV Movie Awards Nominees: Pirates, Spartans â€” And That Crazy Kazakh”).

Victoria Beckham and Justin Long will also be among the celebrities heading to the Universal City, California’s Gibson Amphitheater for the June 3 extravaganza, to be hosted by the first woman of comedy, Sarah Silverman (see “Sarah Silverman To Host MTV Movie Awards; Promises ‘Pinch Of Fun’ “). There’s no way to bend this one: Beckham chose the MTV Movie Awards to make her first official television appearance since moving to the States with soccer-playing husband David.

What will deliver the night’s most talked-about joke? Even money’s on Silverman, but odds are quickly falling for newly announced presenter Robin Williams. Quick on his feet and no stranger to improv, Williams will find himself right at home presenting at the awards â€” which will be broadcast live for the first time ever at 8 p.m. ET. He will be joined by John Krasinski and Mandy Moore, no doubt well-versed in how to keep a straight face after working with Williams on “License to Wed.”

(Get an eyeful of Rihanna, Jay-Z, Jessica Alba and other performers and presenters, right here.)

Also at the big show, soulful British singer/songwriter Amy Winehouse will trot out her international hit “Rehab,” while chart-toppers Rihanna and Jay-Z will take the stage together to perform the single “Umbrella” from her upcoming album Good Girl Gone Bad.

(See Rihanna get hyped up for her big performance with Jay-Z right here.)

They’ll all be on hand to witness what may be the most exciting Movie Awards yet, as crowd-pleasers “300” and “Pirates of the Caribbean: Dead Man’s Chest” fight for Best Movie honors. The two blockbusters lead the way with five and four nominations, respectively. Other films hoping to clear out some mantle space include “The Devil Wears Prada,” “Borat” and “Blades of Glory.”

But the biggest winner of the night might wind up being you. For the first time ever, MTV will award a Golden Popcorn to the viewer who submits the Best Movie Spoof. Fans can enter their own parodies at Yahoo! Movies and then vote for the funniest one.

Fans can vote by visiting MovieAwards.mtv.com before May 29, or from their mobile phones by texting “MOVIES” to 22422. Voting is also available by dialing toll free to 1-877-MTV-VOTE, through which fans can support their favorite nominees in each category. For the first time ever, the 2007 MTV Movie Awards will offer live voting during the show, with one category remaining open for viewers.

Catch the latest on the 2007 MTV Movie Awards, including exclusives from host Sarah Silverman, nominee and presenter announcements, photos, highlights from years past and much more at MovieAwards.mtv.com And don’t forget to grab the popcorn and tune in to the big show when it airs live â€” for the first time ever! â€” Sunday, June 3, at 8 p.m. ET.