Madonna Dances for Money at U.N. For Orphaned Children in Malawi 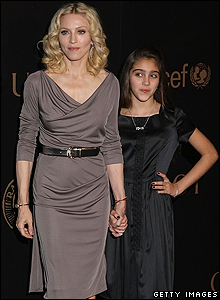 Stars out for Madonna fundraiser
Someone paid $600,000 for a dance lesson with Madonna reported at EINNEWS

NEW YORK (RUSHPRNEWS) February 8, 2008 -Madonna has hosted a celebrity-packed event on the lawns of the United Nations in New York, raising money for orphaned children in Malawi.
Tom Cruise, Jennifer Lopez and Gwyneth Paltrow were among many stars at the dinner, which raised $5.5m (Â£2.8m) for charities Raising Malawi and Unicef.

But the event attracted controversy as sponsor Gucci pegged it to the opening of its new flagship New York store.

Madonna and husband Guy Ritchie are in the process of adopting a Malawian boy.

Speaking at the event, Madonna – who set up the Raising Malawi charity – said: “I want to put Raising Malawi on the map.
AUCTION BIDS
$600,000 – A dance lesson with Madonna and Gwyneth Paltrow
$350,000 – Hang out at Yankee Stadium and spend an hour playing football with David Beckham
$120,000 – A trip to Paris with a tour of a vineyard and lunch with Salma Hayek
“I want credibility as a philanthropic organisation. I want to inspire people. I don’t want them to just write me a cheque – I want them to give me a piece of their heart.”

Alicia Barcena Ibarra, Mr Ban’s undersecretary general for administration and management, said her office “should have investigated more fully” before it approved Unicef’s request to hold the event.

Ms Barcena Ibarra said she did not believe it was correct for Gucci to publicise the event in conjunction with the opening of a new store “and I think we have to look into that”.

But while Mr Ban did not attend the event, she said he understood the proceeds would “be used for a proper purpose as agreed between Unicef and the organisers”.

Despite announcing the fundraising event in November as a celebration of the opening of a new Gucci store on Fifth Avenue, Gucci chief executive Mark Lee said the two events were a “coincidence”.

“Really tonight is about the charities and the money we’re raising,” he said.

Speaking after the event, Tom Cruise said it had been a “moving” and “extraordinary” evening.