No matter how you may feel about it, there’s no doubt which way Hollywood swings when it comes to portraying the president.

Hollywood,Calif.(RUSHPRNEWS)10/13/08– As George W. Bush’s presidency comes to an end, it’s clear there is no love lost between him and Hollywood. In the largely Democratic town of Tinsel, many voters wish Dubya had gotten the boot a long time ago.

While Jay, Dave, Conan and countless other comedians always roast whoever resides at 1600 Pennsylvania Avenue, can anyone remember any sitting president that has been so frequently portrayed as a buffoon on the big screen?

Let’s recap with these categories:

The Fake Bush – George W. Bush as an actual character portrayed by an actor or impersonator:

In Harold and Kumar Escape from Guantanamo Bay our two lovable stoners parachute onto Double U’s Texas ranch, get high with him in the presidential game room, complete with a dartboard and bikini posters, and convince the Commander-in-Chief to stand-up to his father. “I don’t need your friends to tell me what to do anymore!” Junior yells on the phone to Bush Senior.

Then there’s Uwe Boll’s Postal, where George and Osama Bin Laden are made out to be secret allies. In fact, the movie poster says it all as it shows the duo holding hands, seemingly skipping towards us, while the sunset behind them is in fact a nuclear explosion.

The Not-Bush Bush – He may not have been referred to as George W. Bush, but I’d say this Mr. President was clearly modeled after Hollywood’s favorite whipping-boy-president:

Dennis Quaid’s President Joseph Staton in American Dreamz is so out of touch, he hasn’t read a newspaper since setting foot in office. To reconnect with the public and boost approval ratings, his staff convinces him to be a guest judge on an “American Idol”-type show.

In Scary Movie 4, Leslie Nielsen’s President Baxter Harris would rather read to school children than attend to an alien invasion. 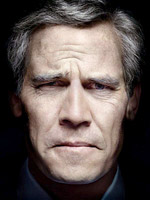 The Real Bush – The dude himself:

Directors like Michael Moore find the real thing just as mock-worthy, doing it with aplomb in Farenheit 911 and Sicko. Even a picture of the guy is used to try to elicit laughs in X-Files: I Want to Believe, when Mulder notices a portrait of Bush and J. Edgar Hoover side by side in an FBI office and wonders if there’s a connection. Cue the whistling “X-files” conspiracy theme….

Even without a picture or vocals, Bush is still made out to be a buffoon-by-association when the post-script in Anchorman informs us that Steve Carrell’s lame-brained sportscaster goes on to be a top aide to President Bush – surprise, surprise.

The Hidden Bush – Bush as inspiration for an unrelated character:

Will Ferrell told me that he modeled his immature, petulant man/child character in Step Brothers on President George W. Bush, proving that Bush- mocking reached a crescendo in 2008.

The Biopic -an interview with Stone and crew- And now folks, for the coup de grace, the swan song of swan songs: Oliver Stone’s upcoming W. After a screening of the film, I chatted with the cast and crew.

Stone has previously shown us his version of former U.S. presidents in Nixon and JFK, but never has he depicted one that is still sitting in office. The movie’s title reflects today’s celebrity world in which the ultimate sign of ubiquity is being known by just one word: Bono, Cher, Oprah…and “W.”

The heart of the film lies in the dynamic between Bush Jr. and Sr. – father-son issues that run so deep it’s like watching a modern-day Greek tragedy unfold.

“I think Mr. Bush has no sense of accountability or responsibility,” said Stone. “He personalizes very complex situations down to â€˜me.’ People think Bush is a lightweight. That is not quite so. I think the ego dominates and unfortunately simplifies complex issues down to â€˜me and my reactions to things’ and â€˜I am stronger than Dad.'”

That is not to say that the film is not without some laughs.

“Bush is an exaggerated personality,” adds the actor who portrays him, Josh Brolin. “There’s gestures of his you can’t deny are hilarious. That is why there are so many cartoonish impersonations of him.”

However, the film is not a lampoon by any means, cautions the actor. “This is a dramatic version with comedic undertones which allow you to breathe.”

“We weren’t trying to be funny, not at all, ever, ever,” adds Thandie Newton, who plays Secretary of State Condoleeza Rice. “It was always about being authentic, being truthful. We were trying to find the texture to these relationships. A lot of what these people said to each other – and did – was preposterous. And it is funny. But it’s the kind of funny where two seconds later you’re crying.”

While the curtain has not yet fallen on Bush’s eight years in office, the filmmaker and cast firmly believe the time is right for the release of W.

“I think its important, in the context of the coming election, for as much of the history of this administration to be in front of the people to judge one way or the other,” said Scott Glenn, who plays Secretary of Defense Donald Rumsfeld. “I think it’s important to put that out in front of everyone.”

How will â€˜W.’ measure up to other Bush portrayals onscreen? Judge for yourself when the film opens Oct. 17.

About the author: Zorianna Kit was formerly on staff at the Hollywood Reporter and People Magazine before becoming entertainment anchor at KTLA in Los Angeles and the resident film analyst at the TV Guide Network. She is a member of the Broadcast Film Critics Association and was a movie reviewer on AMC’s “The Movie Club with John Ridley.” She has filled in for Roger Ebert on “Ebert & Roeper” and appeared as herself in such films as “Iron Man,” “The Longshots” and “Lakeview Terrace.” For more on Zorianna, please visit www.zoriannakit.tv.Â  Send feedback on this column to editorial@fandango.com.