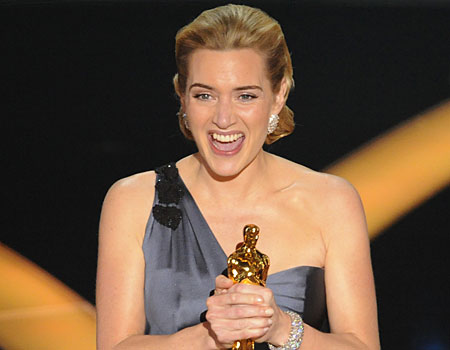 HOLLYWOOD(RushPRnews)03/04/09–Six Oscar nominations since 1996, but on the night of the 2009 Academy Awards Kate Winsletâ€™s dream of winning that Oscar finally came true. A dream sheâ€™s had since she was eight years old, Winslet never imagined sheâ€™d be giving the speech she used to practice in front of the bathroom mirror with a shampoo bottle in her hand.Â  â€œWell itâ€™s not a shampoo bottle nowâ€ she stated confidently as she held up her golden statuette, and she plans to keep her Oscar right next to the one her husband, Sam Mendes, won for â€œAmerican Beautyâ€.
Running up against other brilliant actresses including Meryl Streep, Angelina Jolie, Anne Hathaway and Melissa Leo- this year was indeed Kateâ€™s, and she worked darn hard to earn it. â€œHaving been here before and lost, to be here and win, I’ve got to tell you, winning is really a lot better than losing.â€

With two magnificent performances this year in both â€œThe Readerâ€ (which she won Best Actress for) and â€œRevolutionary Roadâ€ (which she was almost nominated for), Winsletâ€™s meditative devotion to her characters certainly made choosing between the two difficult, but in the end everything fell into place.

And to think how differently things could have turned out had Nicole Kidman taken the role of Hanna Shmitz in â€œThe Readerâ€- after all she was the first choice.

Nevertheless, Winslet is truly one of the great actresses of our time. Every role is another challenge and always distinctive- from Ophelia in Kenneth Branaghâ€™s â€œHamletâ€, Juliet Hulme in â€œHeavenly Creaturesâ€ to Clementine Kruczynski in â€œEternal Sunshine of the Spotless Mindâ€, Winsletâ€™s repertoire of carefully chosen films, allow her to best express her dynamism and capabilities as an actress.

She is daring and unbounded- she can make audiences sympathize with a Nazi SS guard, and does so without repent. â€œI was very aware that if an audience did feel any level of sympathy for Hanna, and they felt morally compromised as a consequence, that would be an interesting emotion for them to then deal with.â€

Even when it comes to nudity or performing sexual scenes, she takes risks many actresses donâ€™t, though she admits that the set of â€œRevolutionary Roadâ€, directed by her own husband was quite a different story. â€œI was pathetic. And, he was absolutely brilliant, and just kept saying to me, you’ve done this so many times before. And I would turn to him and say yes darling but youâ€™re standing right there, so, isn’t it allowed to be a little bit weird?â€

Always maintaining a solid level of professionalism and duty to excellence, to be nominated and win in the same category as Meryl Streep is only the beginning of whatâ€™s to come. A vibrant and gifted actress, Winslet finally gains the respect and recognition she has deserved for so long.