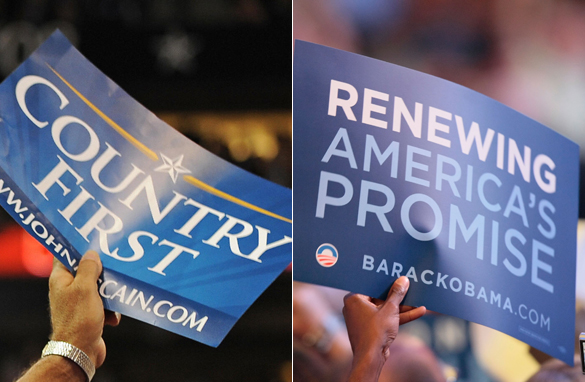 Oxford, Mississippi(RUSHPRNEWS)09/27/2008–The two major party candidates for president of the United States, Republican Senator John McCain and Democrat Senator Barack Obama met in a spirited debate over the financial crisis and foreign policy Friday at the University of Mississippi.

As VOA’s Greg Flakus reports from the debate site in Oxford, Mississippi, the two candidates clashed frequently over such issues as tax cuts, Iran’s nuclear ambitions and the wars in Afghanistan and Iraq.
Although this was to have been a debate focused exclusively on foreign policy issues, the grave financial crisis that almost undermined the debate was the top issue addressed during the first half of the debate. Both Senators came to Mississippi from Washington, where they had been involved in the effort to put together an emergency package to stem the crisis.

On Wednesday, Senator McCain suspended his campaign and called for a postponement of the debate in order to concentrate on the financial crisis. Senator Obama said he would come to the debate alone, if necessary, and for two days the fate of this first presidential debate of the 2008 election was uncertain. On Friday, however, just hours before the event was to take place, Senator McCain said enough progress had been made in Washington for him to come to the debate.

In their responses to questions about the crisis, the two senators gave support to the general idea of a government bail out plan, but differed over what needed to be done to restore the nation’s economic health. Senator McCain said government needs to restore fiscal responsibility.

Senator Obama fired back, accusing Senator McCain and Republicans of approving tax cuts for the wealthy while neglecting the needs of average working Americans.

“If we are spending $300 billion on tax cuts for people who do not need them and we’re not even asking for them and we are leaving out health care, which is crushing on people all across the country then, I think, we have made a bad decision and I want to make sure we are not short-changing our long-term priorities,” he said.

John McCain
John McCain at first presidential debate (26 Septmeber 08)
When the debate moved to foreign policy, the exchange became more heated, with Senator McCain frequently suggesting that Senator Obama did not fully understand such issues as the threat of a nuclear Iran or how to deal with Russia. Senator Obama fought back with criticisms of the Bush administration’s policies, which he said Senator McCain has largely supported. Senator McCain hailed the success of the military surge in Iraq and Senator Obama attacked the decision to invade Iraq in the first place.

One of the fiercest exchanges between the two candidates came over the issue of Iran and what to do about its plan to develop nuclear weapons. Senator McCain emphasized the threat this would pose to Israel and attacked Senator Obama for saying he would hold direct meetings with Iranian leader Mahmoud Ahmadinejad.

“What Senator Obama does not seem to understand is that if, without precondition, you sit down across the table from someone who has called Israel a stinking corpse and wants to destroy that country and wipe it off the map, you legitimize those comments. This is dangerous. It is not just naive, it is dangerous,” he said.

Barack Obama
Barack Obama at presidential debate in Oxford, Mississippi (26 Septmeber 08)
Senator Obama responded by defending his willingness to meet with any foreign leader at any time if he believed it would make the United States more secure.

“Now, understand what this means, meeting without preconditions. It does not mean that you invite them over for tea one day. What it means is that we do not do what we have been doing, which is to say that ‘until you agree to do exactly what we say, we will not have direct contacts with you,” he said.

Senator Obama said one of McCain’s own advisors, former Secretary of State Henry Kissinger, had endorsed the idea of meeting with Iran’s leaders without preconditions. Senator McCain said that was not true. In a recent meeting with other former secretaries of state, Kissinger did say U.S. officials should meet with the Iranians without preconditions, but he did not say the two presidents should meet.

The next scheduled debate will be between the two vice presidential candidates, Republican Governor Sarah Palin of Alaska and Democratic Senator Joe Biden of Delaware. That event is scheduled for October 2 at Washington University in St. Louis, Missouri.