â€œDalai Lama Renaissanceâ€, narrated by Harrison Ford, Premieres Theatrically in U.S. on May 23 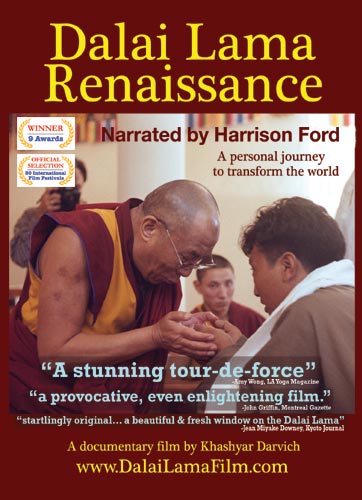 Documentary is the first theatrical film about the Dalai Lama in U.S. since international spotlight on China and Tibet

â€œWhat the Bleep Do We Knowâ€ Physicists Fred Alan Wolf and Amit Goswami, Michael Beckwith from â€œThe Secretâ€, and Air America radio host Thom HartmannÂ  are among those appearing.

â€œDalai Lama Renaissance,â€ produced and directed by Khashyar Darvich, is the first film about the Dalai Lama and Tibet to open theatrically in the United States since the international spotlight placed on China for its firm handling of Tibetan protestors speaking out against Chinese policies in Tibet.

â€œDalai Lama Renaissanceâ€ opens one day after the premiere of Harrison Fordâ€™s â€œIndiana Jones 4,â€ which opens internationally on May 22, and is only among a small handful of documentaries that Ford has chosen to narrate during his career.

“I narrated Dalai Lama Renaissance,â€ says Harrison Ford, â€œbecause I believe His Holiness is making a positive influence in our world.Â  For me, the film represented an opportunity to continue assisting the optimistic efforts of an extraordinary individual.â€

In 1995, Ford spoke to the U.S. Senate Foreign Relations Committee about Chinese policy in Tibet:

Ford told the Congressional panel: â€œThe Tibetan struggle is no ordinary freedom struggle. It is a path of non-violence. As an American who cares deeply about justice, freedom and democracy, I can tell you that this is a cause that touches at the core of our own values. It is about the survival of a people who seek only to democratically determine their own government, to have the freedom to practice their own religion without interference, and to bring up their children in a safe environment where they can be proud of their unique heritage.â€
Â

San Francisco recently experienced protests over the running of the Olympic torch in the city, a few months before the Summer Olympic Games, which are scheduled to begin in Beijing on August 8.

The film features two of the starring quantum physicists from the hit theatrical documentary â€œWhat the Bleep Do We Know,â€ Physicists Fred Alan Wolf and Amit Goswami. Also appearing in â€œDalai Lama Renaissanceâ€ are Michael Beckwith (who appears in the film â€œThe Secretâ€ with Wolf), Air America radio host Thom Hartmann, and others.
Â
The film tells the story of 40 Western innovative thinkers who travel to India in the Himalayan Mountains to meet with the Dalai Lama to solve many of the worldâ€™s problems. What happened was surprising and unexpected, and was captured by a five camera, and an eighteen person crew.
â€œDalai Lama Renaissanceâ€ premieres theatrically in the United States on May 23 in San Francisco at the Roxie Theater, and in Santa Fe, New Mexico at the Santa Fe Film Center. On May 29, the film screens theatrically at the Boulder Theater in Boulder, Colorado, and then begins a theatrical run in Portland in June. It is expected to play in several additional cities across the U.S.
Â
On October 8, the film opens theatrically in Germany, Austria and Switzerland, and will be released in Holland and Belgium in November. It is expected to be released in several other countries around the world before the end of the year.
Â
â€œDalai Lama Renaissanceâ€ has won 12 film festival awards, and is the official selection of 38 film festivals around the world, where it consistently has attracted sold out audiences.
Â
For more information, please see www.DalaiLamaFilm.com, or contact Wakan Films at: information@DalaiLamaFilm.com or 310-772-8272.