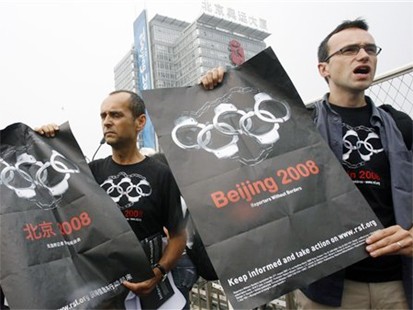 NEW YORK (RUSHPRNEWS) AUGUST 27, 2008-–Eight American activists who were jailed by Chinese authorities during the Olympic games for participating in protests said Monday they were interrogated for hours, deprived of sleep and accused of having ties to the U.S. government.

The group was sent home late Sunday during the closing ceremony. Some were activists and artists who demonstrated against China’s occupation of Tibet; others were bloggers photographing those events.

The detainees said at a news conference outside New York’s City Hall they were kept in cells and were only allowed to leave for interrogations, which sometimes lasted for hours. Some said they emerged more dedicated than ever to their cause.

“Our conditions were uncomfortable, but because we’re Westerners, we suffered absolutely nothing compared to what the Tibetan people suffer,” said John Watterberg, a 30-year-old musician who lives in Brooklyn.

U.S. officials expressed disappointment on Sunday that, after 17 days of Olympic competition, the Olympics did not bring more “openness and tolerance” in China.

Chinese organizers had been nervous about security and protests; no rallies were held throughout the entire Olympics in the three parks designated as protest zones after Chinese officials declined to issue permits to 77 applicants.

Mostly foreign activists staged a series of small illegal demonstrations near Olympic venues and at Beijing landmarks. The group speaking at City Hall on Monday included demonstrators who were rounded up during different actions on different days. All had similar stories.

Watterberg and another New Yorker, Jeremy Wells, said they were tackled and detained the evening of August 20 while staging a demonstration with two other activists outside the National Stadium, one of the main Olympics venues.

During an initial interrogation, they were told they had broken Chinese law and would be held for 10 days. They were then moved to a detention center where they were locked in a cell, allowed only to leave for interrogations that lasted between four and 16 hours.

With lights shining on them, prisoners were locked into high-backed metal chairs with bars that went across their laps.

Interrogators, sometimes speaking through interpreters, would not let them sleep, and accused them at times of working for state-funded groups and organizations that had ties to the U.S. government.

“They asked about our actions, our roles, about our lives-everything from where I went to high school to everything I ate in China,” Wells said.

Detainees said they wore dirty uniforms of red t-shirts and black shorts. Drinking water was only turned on for 15 minutes a day, so prisoners would scramble to fill old soda bottles or other containers because it would be all they could drink for 24 hours.

“It was the scariest-it was beyond anything I could imagine in a movie,” said Jeff Rae, a 28-year-old photojournalist from Manhattan. Rae said he was videotaping a demonstration when he was detained on August 18.

Some of the detainees said they asked daily to speak with the U.S. embassy, but were not allowed to do so until a day or two after they were detained.

They were given no warning about their release, which came during the closing ceremony on Sunday, and were not told why they were being let go.

Once the prisoners were rounded up and put into vans, their possesions were returned. The luggage that the detainees had left at their hotel rooms was also rounded up and given back.

Many detainees said the Chinese officials kept some of their electronics, such as cameras and laptop computers.