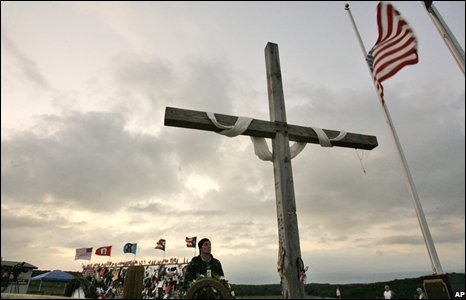 NEW YORK, (RUSHPRNEWS) 09/11/2008–The nation marked the seventh anniversary of the September 11 terrorist attacks on the United States with memorial services, tributes and moments of silence all over the country. Mona Ghuneim reports from VOA’s New York Bureau.

Seven years after the attacks, New Yorkers gathered at the site where the World Trade Center towers once stood.

Cazzandra Peterson tosses a rose into the reflecting pool in memory of her father William who died in the World Trade Center attacks, in New York, 11 Sep 2008.

As in years past, the New York ceremony included four moments of silence – marking the times that hijacked airplanes crashed into each of the twin towers, and the times when each building collapsed.

This year, family members and students representing the homelands of the victims read aloud the names of more than 2,700 people who died in New York.

The city’s mayor, Michael Bloomberg, presided over the anniversary event. He said the country came together to bear witness to the “day, which began like any other and ended as none ever has.”

“We return this morning as New Yorkers, Americans and global citizens remembering the innocent people from 95 nations and territories that lost their lives together that day,” Bloomberg said.
US President George W. Bush and First Lady Laura Bush stand during moment of silence commemorating 7 year anniversary of September 11th attacks on US from the South Lawn of White House, 11 Sep 2008
In Washington, President Bush and first lady Laura Bush observed a moment of silence at the White House. The president then attended the dedication of a new September 11 memorial at the Pentagon, where 184 people died when another hijack planes crashed into the building. Services were also held in Shanksville, Pennsylvania, where 40 people died aboard a fourth hijacked plane that crashed into a field, apparently after passengers aboard the craft tried to overcome their captors.

McCain and his Democratic rival, Barack Obama, are expected to appear together at Ground Zero later in the day to pay their silent respects. Laying politics aside for the day, they will place wreaths at the World Trade Center site, then later in the evening speak at a forum on public service at Columbia University.

As in years past, two bright blue light beams will shine at night Thursday over New York City from the spot where the fallen towers stood.